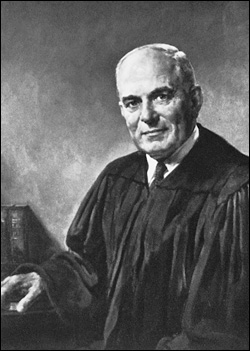 Justice Felix J. Aulisi was born in Laviano, Italy, in the province of Salerno, in 1901. During his youth, he lived with his mother in Italy because his father had come to America to seek the family’s fortune. Justice Aulisi followed his father to the City of Amsterdam, Montgomery County, at the age of 12. He helped his father in his shoemaker shop. He graduated from Union College and Albany Law School and was admitted to the Bar on September 15, 1925. He began practicing in Amsterdam with the law firm of Conover, Myers and Searle. He continued with the firm for five years before beginning a solo practice. Following service as an assistant district attorney in Montgomery County, he commenced his judicial career with his election as Surrogate in 1932, followed in 1949 by his election as County Court Judge, and then, in 1952, his election to the Supreme Court (he was re-elected in 1966). He served on the Appellate Division from 1964 to the end of 1971, when he retired at the age of 70. He then returned to the trial bench as a certificated Justice. He finally resigned for health reasons in 1975. During World War II, Justice Aulisi served three years in the Army in North Africa, Sardinia, and Italy, attaining rare distinction as a much decorated military judge with the United States Army occupation forces in Italy as a captain and a major. In 1944, when his surrogate judgeship came up for election, he was returned unopposed for a third term in absentia, and the oath of office was administered to him in Rome. When Justice Aulisi volunteered for military service in February 1943, the 41-year-old judge was married, had three children, and held an exempt position as a judge of a court of record. Justice Aulisi died on September 20, 1976. His brother, Arthur, was a Fulton County Supreme Court Justice. His two sons-in-law, Michael Riccio and Gene Catena, have served as judges in Montgomery County.