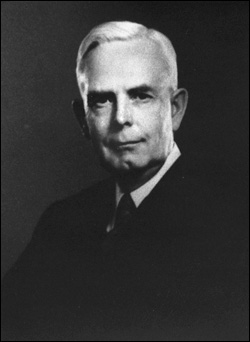 Justice Daniel F. Imrie was born September 15, 1885, in Caldwell and attended the public schools in Lake George, Warren County. His father, Robert Imrie, was a Lake George attorney. Justice Imrie graduated from Union College in 1906 with the degree of Bachelor of Philosophy. He then graduated from Albany Law School in 1908 and was admitted to the Bar that same year. He conducted a general practice in Lake George until 1911, after which he relocated to Glens Falls. He represented his Senatorial district at the State Constitutional Convention in 1938. Justice Imrie was elected to the Supreme Court in 1941. He had served twice as city attorney of Glens Falls, and also served on the city’s civil service commission and as chairman of the city planning commission. In 1944, he was named to preside over the Grand Jury investigating legislative spending. In December 1953, Gov. Dewey appointed Justice Imrie to a temporary post on the Appellate Division, Third Department. He was serving on the appellate court when he died on July 19, 1955, at the age of 69. Justice Imrie was very active in the Rotary and was a delegate to the Rotary International Convention in Belgium in 1927.