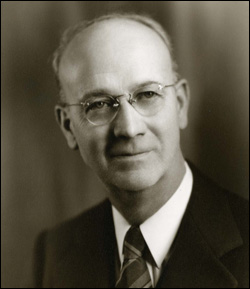 R. Foster Piper was born at Duke Center, Pennsylvania on August 9, 1889. He was the son of a Methodist minister. His upbringing was not rooted, in so far as he lived in perhaps half a dozen different towns before completing high school in Hamburg, New York in 1908. He received his degree from the Syracuse College of Law in 1910, and was admitted to the bar the following year.

Piper engaged in solitary practice in Buffalo until 1940. For a period, he was also Counsel to the Joint Legislative Committee on the Recodification of the Village Law. From 1931 to the close of 1940 he was a Republican member of the State Assembly, in which capacity he was, for periods, Chairman of the Judiciary Committee, Chairman of a Special Committee on the Recodification of the Insurance Law and a member of the Rules Committee. He was also a delegate to the Constitutional Convention of 1938.

Piper was twice elected to the Supreme Court for the Eighth District, sitting from 1941 onward. He was appointed an Associate Justice of the Appellate Division in 1949, there to remain until his death on August 18th, 1955.