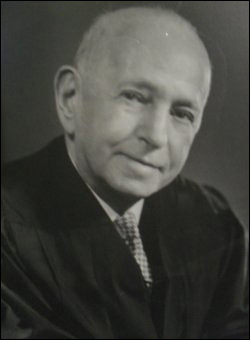 Isidor Wasservogel was best known for conducting the inquiry into the activities of ambulance-chasing lawyers and accident claim agents in the late 1920s. He was named by the Appellate Division First Department to head up this investigation, which was promulgated by a petition from the Association of the Bar of the City of New York, the New York County Lawyers’ Association and the Bronx County Bar Association. Wasservogel was chosen because he was “fitted for the task . . . not only because of his record on the bench in the dispatch of judicial business and in the soundness of his decisions but because for six years, under District Attorney Whitman, he was Acting Assistant District Attorney and thus is equipped to cope with such criminal phases as the inquiry may encounter.” (Pick Wasservogel for Bar Inquiry, New York Times, February 10, 1928, p. 12.)

Justice Wasservogel was born in 1875 in Budapest, Hungary, and came to this country at a young age. He graduated from City College and New York Law School, and was admitted to the Bar in 1897. Private practice followed at the firm of Wasservogel & Medalie. In 1910 he was named an Assistant District Attorney of New York County. There he prosecuted a number of noted homocide cases and cases of fraud. During his six-year term, he was called upon frequently to serve as Acting District Attorney.

Early on he ran for Justice of City Court but was defeated. However, he was elected to the Supreme Court bench in 1920. It was while he was on the Supreme Court bench that he conducted the inquiry into ambulance chasing. As a result of the investigation, 74 members of the New York Bar were disciplined. Some of the recommendations made included that lawyers should get no more than one-third of personal injury damages won and that the court should supervise the fee.

Justice Wasservogel was also notable for taking a leading part in the work of the New York County Supreme Court Justices in relieving the trial term calendars.

In August of 1945 Governor Dewey appointed Wasservogel to the Appellate Division First Department. However, because of the constitutional age limit, he had to retire at the end of that year. Upon retirement, Wasservogel returned to his prior firm, then known as Wasservogel & Sylvester. Three years later he was named as an official referee by the Appellate Division to hear and determine cases where both parties have agreed to that procedure. Appeals from his decisions would be to the Appellate Division, rather than to a Supreme Court justice, just as if he were sitting as a regular member of the Supreme Court bench. In 1951, because of the statutory age limitations, Wasservogel had to retire at the end of the year as official referee. However, he was named as special referee for equity cases in the Supreme Court, to begin January 1, 1952, where he served without compensation.

Justice Wasservogel was married to Dorothy Wasservogel. He passed away on February 8, 1962 at age 86.