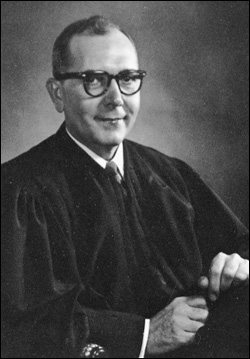 In 1972, Judge Gabrielli was elected to the Court of Appeals. See his full biography HERE.

Judge Gabrielli also sat on the bench of the 4th Department; more information can be found HERE.

Judge Domenick L. Gabrielli was born in Rochester on December 13, 1912, the only son of parents who had immigrated from Italy that same year. He graduated from Albany Law School in 1936 and was admitted to the Bar in 1937. In 1957, he was elected Steuben County Judge and Childrens’ Court Judge. On July 13, 1961, by gubernatorial appointment, he was designated a Justice of the Supreme Court for the Seventh Judicial District; he was elected to a full term in November 1961. In January 1967, Gov. Rockefeller designated him to the Appellate Division, Third Department; two years later, the Governor designated him to the Fourth Department (his home department). He was elected to the Court of Appeals in November 1972. He retired at the end of 1982 because he had reached the mandatory retirement age. He joined the Rochester based law firm of Nixon Hargrave Devans & Doyle and transferred to its Albany office in 1987. He founded the Gabrielli Moot Court Statewide Competition sponsored by Albany Law School. Judge Gabrielli died March 25, 1994.