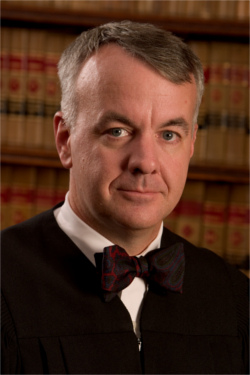 The younger Catterson graduated from Colgate University in 1980 and received his law degree from St. John’s University School of Law in 1985. He was admitted to the Bar in 1986. That same year he began his legal career as an assistant U.S. attorney for the Eastern District of New York, a position he held until 1992. Catterson then joined the Suffolk County Attorney’s office as Deputy County Attorney and remained there until 1998.

Justice Catterson was elected to the Supreme Court, 10th Judicial District (Nassau and Suffolk counties) in 1998 and began serving as a justice of the Supreme Court in Suffolk County in January of 1999. Five years later, in 2004, he was designated an Associate Justice of the Appellate Division, First Department, by Governor George Pataki. In 2006, Justice Catterson was one of seven candidates recommended by the Commission on Judicial Nomination for appointment to the New York State Court of Appeals to replace Judge George Bundy Smith, whose term had expired.

When the Appellate Division was not in session during the summer of 2012, Judge Catterson was one of a number of Appellate Division justices around the state who returned to their home counties to sit on the trial bench for six weeks to help clear a backlog of old cases.

Justice Catterson’s term on the Appellate Division automatically expired on December 31, 2012, as a result of his loss in his bid for reelection to the Supreme Court. In May of 2013, Catterson joined the law firm of Kaye Scholer as litigation special counsel.

Justice Catterson is married and the father of two children. In his spare time he enjoys mountain biking and woodworking.