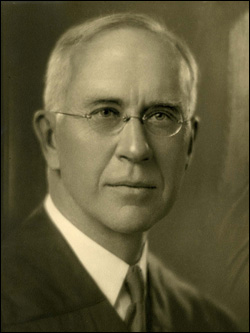 In 1932, Judge Crouch was elected to the Court of Appeals. See his full biography HERE.

Leonard C. Crouch was born in Kingston, New York on July 3, 1866. He was educated at Kingston Academy and received a Bachelor’s Degree at Cornell University in 1889, taking two years of law study as well. He was admitted to the bar in 1891. He practiced along in Kingston for a year, then moved to Syracuse, where he practiced first alone, then in partnership.

Crouch was appointed a Justice of the Supreme Court for the Fifth District on May 13, 1913, and returned by election in November of that year. He remained a trial judge until the close of 1922, at which point he was elevated to the Appellate Division for the Fourth Department. There he remained until March 17, 1932, when, as a member of the Supreme Court, he was affixed to the Court of Appeals. He formally resigned from the Supreme Court at the close of 1933, after his election to the Court of Appeals, on which latter tribunal he remained from 1934 until his mandatory retirement at the end of 1936. Crouch put in three years as an Official Referee, then retired completely. He died in Syracuse on July 2, 1953.