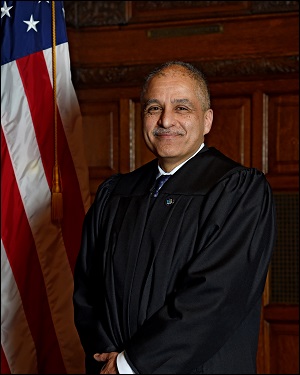 Rowan D. Wilson, Associate Judge of the Court of Appeals, was born in Pomona, California in 1960, and grew up in Berkeley, California. He received his A.B. degree from Harvard College in 1981, and his J.D. degree from Harvard Law School in 1984. He was admitted to the bar of the State of California in 1985, and the bar of the State of New York in 1987. From 1984 to 1986, he served as a judicial law clerk to the Honorable James R. Browning, Chief Judge of the United States Court of Appeals for the Ninth Circuit, based in San Francisco, California.

In 1986, he joined the firm of Cravath, Swaine & Moore in New York City as an associate, and was elected to partnership there in 1991, in which position he continued until February 2017. On January 15, 2017, Governor Andrew M. Cuomo nominated Judge Wilson to serve as an Associate Judge of the Court of Appeals, and the New York State Senate confirmed his nomination on February 6, 2017. While in private practice, Judge Wilson served on the boards of several charitable and not-for-profit organizations and handled numerous pro bono matters.

Judge Wilson resides with his wife and children in Port Washington, New York.