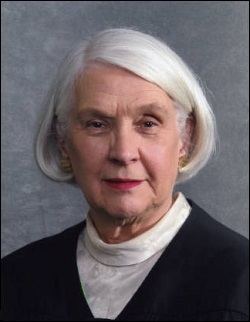 Elizabeth W. Pine graduated from Smith College and received her LL.B from Harvard Law School in 1960. Following her admission to practice on November 3, 1960, Justice Pine was employed in Washington, D.C. and New York City until she moved to Rochester, where she practiced law from 1963 through 1973. She was elected to Monroe County Family Court in 1973 and served there from 1974 through 1976. She served as Administrative Judge of that court from October 1975 through December 1976. She was elected to Supreme Court in 1976 and served as a trial judge throughout the Seventh Judicial District as well as in Manhattan and the Bronx until she was designated an Associate Justice of the Appellate Division in 1985 by Governor Cuomo. She was reelected a Supreme Court Justice in 1990 and was re-designated to the Appellate Division by Governor Cuomo and then by Governor Pataki. She is currently a member of the Committee on Pattern Jury Instructions of the Association of Justices of the Supreme Court of the State of New York, the Statewide Law Guardian Advisory Committee, and the Fourth Department Law Guardian Advisory Committee. Justice Pine is a member of the American Bar Association, a member and fellow of the New York State Bar Association, a member of the Monroe County Bar Association and the Greater Rochester Association for Women Attorneys, as well as the National Association of Women Judges. She is also a member of the Association of Justices of the Supreme Court of the State of New York. She has been active in many court-related committees, including the Committee on the Legal Profession and the Courts (the Craco Committee) as well as in many voluntary organizations, including the Otetiana Council of the Boy Scouts of America, the Rochester Rotary Club, the Ethics Committee of the Kirkhaven Nursing Home, and the Advisory Committee of the College of Business of the Rochester Institute of Technology. Justice Pine retired effective December 31, 2010.