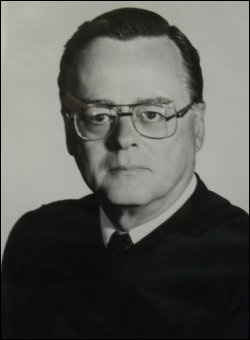 J. Robert Lynch was born in Brooklyn, New York, on March 1, 1921. He and his family later moved upstate, first to Croghan, and then to Lowville, Lewis County, when he was 11 years old. After attending high school at Lowville Academy and Union Free School, he attended Cornell University and Manhattan College. His education was interrupted by World War II and service in the military. Upon return, Lynch received his law degree from Albany Law School and was admitted to the Bar in 1948.

Following law school, Lynch joined the law firm of Cosgrove, Harter and Wright (later known as Scanlon, Harter and Wright) and remained there until 1949, at which time he went into private practice in Lowville. At the same time, he became a law assistant to Judge Fred Young, a Court of Claims judge, where he remained until 1956. During that year, he was a regional manager of Jacob K. Javits’s campaign for U.S. Senate as well as a delegate for the 33rd Congressional District of New York to the Republican National Convention in San Francisco.

After his service as a law assistant to Judge Young, Lynch worked briefly as a general clerk in the office of New York State Senator Henry Wise of Watertown. Following that, he became Lewis County District Attorney in 1959, a position he would hold for only one year since he was elected to the New York State Supreme Court, 5th Judicial District, in November of 1959. Lynch was 38 years old when elected, and became the youngest Supreme Court Justice in the state at that time.

Justice Lynch was reelected to the Supreme Court in 1973 and a few months later designated an Associate Justice of the Appellate Division First Department by Governor Wilson. He sat on the Appellate Division bench for approximately four months each year and the remainder of the year served on the trial bench of Supreme Court in the 5th Judicial District. In 1985 Chief Judge Wachtler appointed Justice Lynch to temporarily fill a vacancy on the Court of Appeals bench during the February 1985 session.

Justice Lynch became a Judicial Hearing Officer for the Supreme Court in 1987. He was appointed a member of the Lewis County Ethics Board in 2005. He has been active in his church and community and was instrumental in the founding of St. Peter’s Parochial School in Lowville and the construction of Our Lady of the Lakes, an outdoor chapel in Number Four, New York. He is also one of the founders of the Lewis County Hospice.

Justice Lynch is now retired and spends his time in Lowville, New York, and St. Simons Island, Georgia, with his wife, the former Sarah Nortz, whom he married in 1950. They have six grown children.

Conversation Between Andrea Lynch (daughter of Justice Lynch) and Amy Heyman on February 22, 2010.