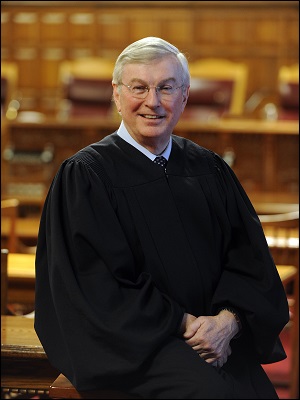 Eugene F. Pigott, Jr., Associate Judge of the Court of Appeals, was born in Rochester, New York, in September 1946.

He graduated from LeMoyne College (B.A.1968). Judge Pigott served on active duty in the United States Army from 1968 to 1970. While in the service, he was stationed in the Republic of Vietnam, serving as a Vietnamese interpreter. He graduated from SUNY at Buffalo School of Law (J.D. 1973) and was admitted to the Bar of the State of New York in 1974. Judge Pigott practiced law in Buffalo, New York, with the firm of Offermann, Fallon, Mahoney & Adner from 1974 to 1982. In 1982 he was appointed Erie County Attorney and served in that position until 1986. In 1986 he became chief trial counsel for the firm of Offermann, Cassano, Pigott & Greco. On February 4, 1997, he was appointed to the New York State Supreme Court by Governor George E. Pataki and thereafter was elected to a full 14-year term. In 1998 he was designated to the Appellate Division, Fourth Department and was appointed Presiding Justice on February 16, 2000. On August 18, 2006, he was nominated by Governor Pataki to the Court of Appeals. His nomination was confirmed by the New York State Senate on September 15, 2006. He and his wife Peggy live on Grand Island, New York. They have two children.