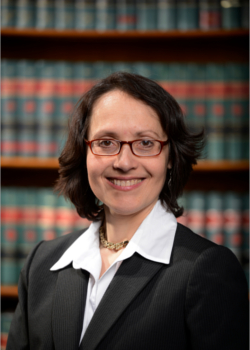 From 1997 until her appointment to the bench, she was a faculty member of the City University of New York School of Law. She founded and served as Director of the Law School’s Center on Latino and Latina Rights and Equality (CLORE). She is an elected member of the American Law Institute, former Reporter and member for the American Bar Association’s Commission on Hispanic Legal Rights and Responsibilities, and has served as a member of the National Board of Bar Examiners Diversity Issues Committee.

She is the author of several articles on civil and women’s rights, and her scholarship has been published in legal journals and anthologies. Her scholarship includes, “An Equal Protection Standard for National Origin Subclassifications: The Context that Matters,” “Extra! Extra! Read All About It: What a Plaintiff Knows Or Should Know Based On Officials’ Statements and Media Coverage of Police Misconduct for Notice of a § 1983 Municipal Liability Claim,” “The Violence Against Women Act and the Construction of Multiple Consciousness in the Civil Rights and Feminist Movements,” “Domestic Violence Against Latinas by Latino Males: an Analysis of Race, National Origin, and Gender Differentials,” and “Puerto Rico’s Domestic Violence and Intervention Law and the United States Violence Against Women Act of 1994: The Limitations of Legislative Responses.” She is also the author of a 1997 and 2003 study on the availability of domestic violence services for Latinas in New York State.

Prior to joining the CUNY Law School faculty, she worked as a Pro Se Law Clerk in the Second Circuit Court of Appeals, a lawyer with the Homeless Family Rights Project of the Legal Aid Society, where she represented homeless families in various matters involving federal and state issues in administrative hearings and judicial proceedings, and as an Associate Counsel for the Puerto Rican Legal Defense and Education Fund (renamed Latino Justice PRLDEF), a national civil rights organization. During her tenure at PRLDEF, she worked on diverse issues including education, housing, and employment discrimination, equity and testing issues, gender equality issues, and language rights discrimination.

In 1993, she clerked for the Honorable Sonia Sotomayor, when she served on the Southern District of New York. From 1992 to 1993, she was an Administrative Law Judge for the New York State Division for Human Rights, and from 2002 to 2007, she served on the New York City Commission on Human Rights. In 2007, New York State Attorney General Cuomo appointed her Special Deputy Attorney General for Civil Rights. In this position she assisted in the development and implementation of the Attorney General’s civil rights agenda, supervised the Civil Rights Bureau and organized and held statewide outreach sessions on civil rights issues.

Among her most recent awards and recognitions are the 2013 Spirit of Excellence Award from the American Bar Association’s Commission on Racial and Ethnic Diversity in the Profession, and the New York State Bar Associations 2012 Diversity Trailblazer Lifetime Achievement Award and 2010 Kay Crawford Murray Award.