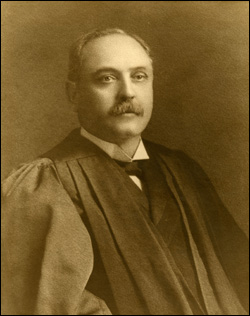 Alfred Spring was born in Franklinville, New York on February 19, 1851, the son of Samuel Spring, who was both District Attorney and Cattaraugus County Judge during the course of his life. The younger Spring was graduated from Ten Broeck Free Academy in Franklinville in 1870. He was a student of literature at the University of Michigan from 1870-72, studied law in his father’s office from 1872-75, and was admitted to the bar in the latter year.

Spring practiced law in Franklinville from 1878 to 1895. During this time he held office as Supervisor of Franklinville from 1876 to the close of 1879, and as Surrogate of Cattaraugus County from 1880 to the end of 1892. He was appointed to the State Supreme Court on January 10, 1895, elected to a full term in November 1895, and re-elected unopposed in 1909. In January of 1899, he was appointed an Associate Justice of the Appellate Division of the Fourth Department where he sat until his death in Clifton Springs, New York on October 22, 1912.