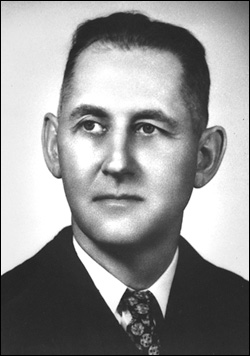 Justice Howard A. Zeller was born February 26, 1912 in Syracuse and attended grade school there. His family moved to Munnsville in Madison County in the summer of 1925. He graduated from Stockbridge Valley High School (as salutatorian) in June 1929. In September 1929, he was admitted to Hamilton College, which then was for men only. He graduated in 1933 and then enrolled in Syracuse University Law School, from which he graduated in 1936. He was admitted to practice in 1937 and became an associate to Stanley Bliss in Oneida. The association continued until Justice Zeller entered the military in February 1944. Mr. Bliss died suddenly in August 1944 and the office was closed. In World War II, Justice Zeller was assigned to the U.S. Naval Base in Casablanca in former French Morocco. He was home on a month’s leave when the atomic bomb was dropped on Japan. In November 1945, Justice Zeller was elected Madison County District Attorney, a part-time position with no assistants. He had previously served as police justice of the village of Munnsville and justice of the peace for the town of Stockbridge. He was re-elected District Attorney in 1948. Justice Zeller became a partner of the firm Covill, Nemeti & Zeller in 1945. Justice Zeller was elected to the Supreme Court, Sixth Judicial District, in 1949. He was appointed to the Appellate Division by Gov. Dewey, effective September 17, 1954. At his own request, he left the Appellate Division effective November 22, 1957 (for health reasons), and returned to the trial bench. He was re-elected a Supreme Court Justice in November 1963 and again in 1977. He served as district administrative judge from 1964 through 1982. After reaching the age of 70 in 1982, he was twice certified to continue as a Supreme Court Justice for two year periods. From 1986 through the end of 1995, he served as a judicial hearing officer. He then retired and vacated the chambers he had occupied in the Madison County Courthouse for 46 years. Justice Zeller died in 2002.