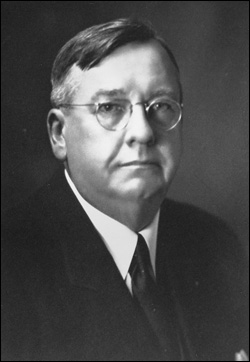 Presiding Justice James P. Hill served as Presiding Justice of Third Department, from January 1, 1933 to the end of 1948, sixteen years spanning most of the Great Depression and all of World War II. He was born in the town of German in Chenango County on April 7, 1878. His early education was in the local public schools and at Cincinnatus Academy in Cortland County. He studied law in the law office of Bixby and Brown in Norwich, Chenango County, and was admitted to the Bar on November 1, 1901. Shortly thereafter he opened his own law office. In the fall of 1907, he was elected Chenango County District Attorney and served until the beginning of 1914, having been re-elected in 1910. He was elected Chenango County Judge and Surrogate in 1913 and held that office until the beginning of 1924, having been re-elected in 1919. In the fall of 1923, he was elected a Justice of the Supreme Court of the Sixth Judicial District; he was re-elected in 1937. He remained on the Supreme Court until the date of his retirement, December 31, 1948. Gov. Smith designated him an associate justice on December 13, 1927. Gov. Lehman appointed him Presiding Justice, effective January 1, 1933. In the fall of 1936, he was an unsuccessful Court of Appeals candidate. He was a delegate to the 1938 Constitutional Convention.