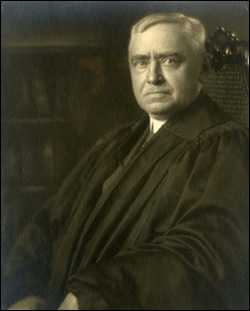 William W. Clark was born on February 14, 1858 in Elgin, Illinois. He grew up in Clarks Mills, Oneida County, New York, the son of a textile manufacturer. He attended local schools, the Whilston Seminary, and Hamilton College, receiving a law degree in June of 1878. He was admitted to the bar the following year. From 1879 until the close of 1893, he engaged in a solitary private practice in Wayland.

Clark first worked in the local Republican party as a campaign worker specializing in public speaking on behalf of the party’s slate of candidates. He was then thrice elected District Attorney for Steuben County, holding office from 1894 to the end of 1902. In the latter year, he was elected Steuben County Judge. He presided over the County Court until his appointment to the Supreme Court for the Seventh District on March 15, 1906, replacing the late John Parkhurst. He sat as a trial judge until his appointment to the Appellate Division for the Fourth Department in 1919. He remained on this Court, despite a preference for trial work, until his mandatory retirement at the end of 1928.

After departing the bench, Clark devoted his working attention to the affairs of the First National Bank of Wayland, which, in what might be considered unorthodox today, he had founded while a public prosecutor in 1899. His presidency of the bank extended from its organization to his death on November 18, 1949.