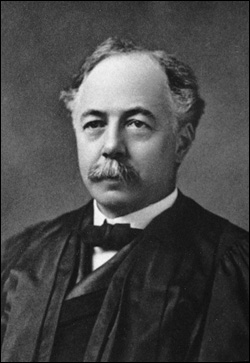 Justice George F. Lyon was born in Barker, Broome County, on July 13, 1849. He graduated from Binghamton Academy in 1867 and then attended Hamilton College from 1898 to 1872, graduating with an A.B. degree. Following his admittance to the Bar in 1875, he joined the firm of Chapman & Martin, with whom he had studied law. The firm became Chapman & Lyon when Judge Martin was appointed to the Supreme Court in 1877; Judge Martin later served on the Court of Appeals. Mr. Chapman, who also served as Solicitor General of the United States, died in 1890. Thereafter, Justice Lyon practiced alone. He was a member of the Constitutional Convention in 1894. In 1895, he was elected to the Supreme Court and re-elected in 1909. He retired from the Supreme Court in 1919 when he was 70. He thereafter served as an Official Referee. Justice Lyon served on the Appellate Division from March 1912 until he retired. He also served from January to March 1903 on the Court.