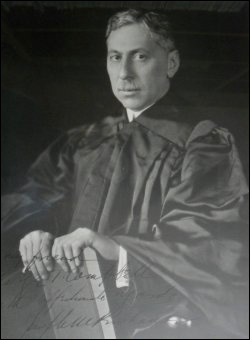 Justice Proskauer was born on August 6, 1877 in Mobile Alabama to Alfred and Rebecca L. Proskauer. His family were German and Austrian immigrants who had come to the United States before the Civil War. At the age of 15, he came to New York City to attend college, receiving an A.B. Degree from Columbia University in 1896 and an LL.B. from Columbia Law School in 1899. He was admitted to the bar that same year.

After being admitted, Justice Proskauer and a close personal friend formed a law partnership. In 1902, they merged with the firm of James, Schell & Elkus which was later known as Elkus, Gleason & Proskauer. Early in his professional career, Justice Proskauer became acquainted with New York Governor Alfred E. Smith and served as his campaign advisor and speech writer as well as being a close friend until the Governor died in 1944. In 1940, he split with the Democratic party, not agreeing with the idea of a third term for FDR. In fact, he did not support another Democratic candidate for President until Lyndon B. Johnson ran in 1964.

In June of 1923, Justice Proskauer was appointed by Governor Smith to fill an unexpired term in the New York State Supreme Court and that November was elected to a full term. In 1927, he was designated an Associate Justice of the Appellate Division, First Department and served in that capacity until his retirement from the bench in 1930. Justice Proskauer then returned to private practice and joined the firm of Rose & Paskus, which was renamed Proskauer, Rose & Paskus and is presently known as Proskauer Rose. He remained with the firm for forty years.

Throughout his lifetime, Justice Proskauer was extremely active in many civic and charitable organizations. He was president of the 92nd Street YM-YWHA from 1926 to 1931, served as president of the Federation of Jewish Philanthropies from 1931 to 1935, and was a member of the New York City Charter Revision Commission in 1935. He also served as President of the American Jewish Committee from 1943 to 1949 and was chosen honorary president afterward. Justice Proskauer also testified before the Anglo-American Committee on Inquiry on Palestine in January of 1946 on behalf of the American Jewish Committee. As chairman of the State Crime Commission in 1952 looking into organized crime in New York City, Justice Proskauer was involved in the creation of the Waterfront Commission to fight racketeering on the docks.

Justice Proskauer was also an author. His autobiography, A Segment of My Times, details his early family life as well as giving great insight into many political events in which he was involved.

On October 14, 1903, Justice Proskauer married Alice Naumberg Proskauer and they had three children – Frances, Ruth and Richard. He died on September 10, 1971 at the age of 94.