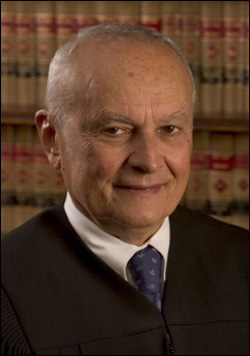 Born in Italy in 1934 to an American mother, Justice Eugene L. Nardelli later moved with his family to the United States, settling in New York. He attended Cardinal Hayes High School in the Bronx and graduated from Fordham College. In 1960, he received his law degree from Fordham University School of Law. He also served in the Army Reserve and was honorably discharged as Captain. After admission to the Bar in 1960, he went into private practice with the firm of Nardelli & Nardelli.

Justice Nardelli served as Legal Counsel to the New York City Housing and Redevelopment Neighborhood Conservation Bureau from 1964 through 1968. He then became Law Secretary to Justice John C. Leonforte in Supreme Court and Civil Court of the City of New York. During those years, Nardelli was a member of the American Arbitrators Association and served as an arbitrator for the New York Civil Court, Small Claims Part, East Harlem Division. In 1969 he was elected Democratic Leader from the 68th A.D., Part A, New York County. In 1972 he served as Delegate to the Democratic National Convention (Presidential) representing the 19th Congressional District. The following year he was elected Democratic District Leader, 68th A.D., Part D, New York County.

Nardelli was elected Judge of the Civil Court of the City of New York in 1975. He remained on that bench for 10 years, 5 of which were as Acting Justice of the Supreme Court, Civil and Criminal Terms. In 1986, he was elected Justice of the Supreme Court, New York County, serving on the Criminal Term bench for two years, then on the Civil Term bench until 1993, at which time Governor Mario Cuomo designated Judge Nardelli an Associate Justice of the Appellate Division, First Department. During his tenure at the First Department, he served as Acting Presiding Justice two separate times — January-March 2002 and January-March 2003. He remained at the First Department until 2010, when he reached the age of mandatory retirement, having been certificated the allowable 3 times.

In 2013, Justice Nardelli joined the law firm of Boies, Schiller & Flexner as counsel in the litigation and appellate practices.

Over the years, Justice Nardelli has been the recipient of many awards and honors, including the Columbian Lawyers Association’s Charles A. Rapallo Award, the New York City Trial Lawyers Association’s Harlan Fiske Stone Memorial Award, the Jewish Lawyers Guild’s Golda Meir Memorial Award, and the State of New York Commission and Institute for Nonviolence’s Martin Luther King, Jr. Award for leadership in promoting nonviolence and social justice. Nardelli was also decorated by the Republic of Italy with the Order of Merit and the attendant title Cavaliere Ufficiale.

Justice Nardelli and his wife Liang, an attorney, were married in 1980. They have one son, also an attorney.