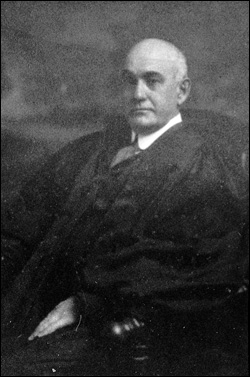 Presiding Justice John M. Kellogg served as Presiding Justice from 1915 to 1921. He was born in Taylor, Cortland County, in 1851. His father, Stephen Kellogg, was a lawyer admitted to the Bar in 1853. He received his early education in the Cincinnatus Academy (in Cortland County) and Cazenovia Seminary. He studied at Cornell University, studied law with his father in Cincinnatus, and then graduated from Albany Law School in 1873, the same year he was admitted to the Bar. In 1874, he began practicing law in Ogdensburg with Stillman Foote. He was appointed a St. Lawrence County Court Judge by Gov. Cornell in January 1882 to succeed Leslie W. Russell who became Attorney General. He also held the offices of recorder of Ogdensburg (elected in 1881) and judge of the Court of Claims (1899 to 1902) prior to becoming a Supreme Court Justice. He was appointed a Supreme Court Justice of the Fourth Judicial District by Gov. Odell on October 16 1902, was elected to the post the following year, and re-elected in 1917. He was designated an associate justice of the Third Department in November 1905 by Gov. Higgins. He left the bench on December 31, 1921, having reached the retirement age of 70. He died at his home in Ogdensburg in St. Lawrence County on January 16, 1925. Some years prior to his retirement, some of the judges in New York County proposed that the retirement age for justices be changed from 70 to 75. His resolute opposition, and his stated willingness to make a public statement in opposition, defeated the movement.