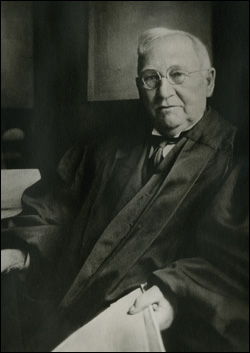 Frederick W. Kruse was born on June 25, 1852 in the German State of Mecklenburg-Schwerein into a peasant family. His family emigrated to the United States in 1853 and settled in Buffalo. He left home in 1865 and was employed as a farm laborer in the summer months in the rural areas in the Buffalo vicinity, while continuing to study in the winter. From 1868 to 1874 he was first a student at Griffith Institute in Springville, NY and then a teacher in the Springville common schools. He served an apprenticeship in law in the office of Cary & Jewell in Olean, NY from 1874-87 and was admitted to the Bar in the latter year. He practiced law in partnership in Arcade, NY from 1877-79, then alone in Olean from 1879 to 1897. He was a member of the New York State Assembly from 1884-87, chairing the Appropriations Committee in 1886 and later the Revision Committee. He sat on the State Commission to Revise the Excise Laws in 1888, acted as the Special Commissioner to Investigate Census Frauds in Minnesota in 1890, and on a State Advisory Committee charged with preparing general legislation for Third Class Cities in 1895. He also often served as a court appointed referee.

Kruse was appointed Cattaraugus County Judge in May, 1897, and elected to a full term in November 1898. He was appointed a Justice of the Supreme Court in May, 1900 and was returned by election in 1900 and 1914. He was appointed to the Appellate Division of the Fourth Department in January of 1907, on which Court he remained until his mandatory retirement at the close of 1922, sitting as Presiding Justice from 1913 onward. He died in Olean on March 18, 1938.