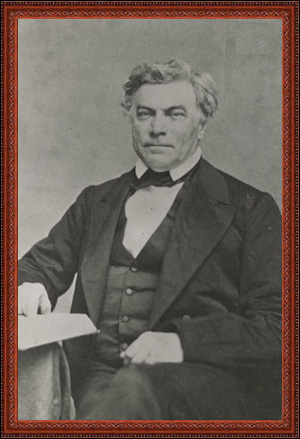 Lewis Woodruff prepared for college at Morris Academy and was graduated from Yale with high honors in 1830.4 He studied law under Judge James Gould at the Litchfield Law School. That school, founded by Connecticut Chief Justice Tapping Reeve, had a distinguished record, sending graduates to the United States Supreme Court, to Congress, and to the highest state courts.5 Soon after being admitted to the Connecticut bar in April 1832, Woodruff received an offer to enter practice with the Hon. Willis Hall, a fellow alum of both Yale and Litchfield Law. Woodruff accepted the offer, and once an Asiatic cholera outbreak in New York City subsided, he moved there and practiced with Hall until 1836.6 Hall later became Attorney General of the State of New York.7 After solo practice for a number of years, Woodruff partnered with the Hon. George Wood and with Richard Goodman from 1840 through 1850.8

On November 4, 1835,Woodruff married Harriette Burnet Hornblower, the daughter of New Jersey Chief Justice Joseph Coerten Hornblower of Newark9 and the granddaughter of Josiah Hornblower.10 Another of Justice Hornblower’s daughters married Justice Joseph P. Bradley of the United States Supreme Court.11 Woodruff’s three children were all born in Litchfield: Charles Hornblower, on October 1, 1836; Morris, on July 30, 1838; and Mary Burnet.12 The two sons followed in their father’s path, graduating from Yale College and becoming lawyers, although the younger son appears to have worked as a merchant rather than a practicing attorney.

In politics, Woodruff was first a National Republican, a party that became the Free Soil Whigs.13 He then became a Republican upon organization of that party.14 Despite having strong political convictions, however, the New York Times reported that he did not act in accordance with them “in a demonstrative manner while occupying a judicial position.”15 Woodruff began his service on the state bench in 1849, having been elected judge of the Court of Common Pleas to succeed Judge Ulshöffer. Allegedly, his election came as something of a surprise, and Woodruff was somewhat reluctant to give up a successful private practice that was much more lucrative than judicial service. Woodruff’s Common Pleas term expired in 1855, and he was subsequently elected Justice of the Superior Court in New York City where he served from 1856 through 1861. During that era, the Superior Court has been described as “one of the most celebrated and reliable benches in the State.”16 Following his Superior Court term, Woodruff retired to the private sector. He joined his elder son Charles H. and the Hon. Charles F. Sanford, all alumni of Yale College, in a partnership. During these years, Woodruff was active in the intellectual life of New York City. From 1858 through 1860, he served as the first president of New York University’s charter Phi Beta Kappa chapter.17 In 1860, Columbia University conferred on Woodruff the honorary doctor of laws degree.18 Although initially connected with the Presbyterian Church on coming to New York, Woodruff was a member of the Collegiate Reformed Church at Fifth Avenue and 29th Street in New York City for many years.19 He became an elder of that church, a church with roots in the oldest Protestant congregation in America.20 Woodruff lived nearby at 10 West 29th Street.21

Governor Reuben E. Fenton appointed Woodruff to the New York Court of Appeals on January 4, 1868. He filled the vacancy created by the resignation of Judge John K. Porter. Among Woodruff’s notable decisions while on the Court of Appeals is King v. Talbot,22 a case that developed the prudent investor rule for trusts and remains important precedent today, having been cited over 200 times in reported New York decisions.23 Historically in England, a trustee could only invest trust assets in government bonds or mortgage-backed securities.24 The Talbot opinion required a trustee, when handling trust assets, to “employ such diligence and such prudence in the care and management . . . prudent men of discretion and intelligence in such matters, employ in their own like affairs.”25 The Court abandoned the strict English limitations, however. In doing so, it afforded trustees substantially more flexibility in deciding how to invest trust assets. While the opinion still precluded a trustee from investing trust assets in more speculative investments,26 it nevertheless served to modernize the trust and preserve its usefulness.

Woodruff’s tenure on the New York Court of Appeals was short-lived, because President Ulysses S. Grant nominated him for a lifetime appointment to the newly-organized United States Court of Appeals for the Second Circuit on December 8, 1869. The Second Circuit, as it does today, decided appeals from the United States District Courts in Connecticut, New York, and Vermont. The Senate confirmed Woodruff in his new position later in December 1869, and Justice Samuel F. Miller swore him in as a federal judge on January 12, 1870.27 The History of the Bench and Bar of New York opined that “[h]is decisions in admiralty and patent suits are particularly able.”28 There were some rumors that President Grant would appoint Woodruff to be Chief Justice of the United States, an appointment that went instead to Morrison R. Waite.

Although Woodruff spent his professional life in New York, he returned to his native Connecticut regularly. In 1870, he bought Judge Reeve’s house in Litchfield as a summer residence. Woodruff died there at one o’clock in the morning on September 10, 1875 Afrom the effects of a complicated disorder of the kidneys, which had confined him to the house since early spring.”29 Many accounts state that Woodruff’s intense dedication to the law adversely affected his health.30 After a funeral in the Collegiate Church, a special train took Judge Woodruff’s body from Manhattan to Woodlawn Cemetery in the Bronx for interment.31 On the following day, the bar met in a Second Circuit courtroom for a memorial service, and a large number of the most prominent New York lawyers came to eulogize their late colleague.32 New York’s Chief Judge, Sanford E. Church, described Judge Woodruff as “an industrious, able and upright judge and honest man, and justly ranked among the first jurists of the State.”33

Tracing one line, the Judge’s only daughter, Mary Burnett Woodruff (1842-1924) married Col. Courtlandt Guynet Babcock (1839-1896) in 1871. They had six children. Of those who survived to adulthood, their daughter, Harriette (Rieta) Woodruff Babcock (1876-1930), married Henry Robinson Palmer (1867-1943), an author, historian, and poet, who was the chief editorial writer for the Providence Journal. Their son, Henry Robinson Palmer, Jr. (1911-1993), was the author of several aviation books, and was active in Stonington, CT civic affairs.

We know of no published writings by Judge Woodruff.