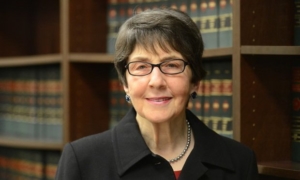 Associate Justice Marcy L. Kahn graduated with an A.B. with honors from Stanford University in 1972 and received her J.D. from New York University School of Law in 1975. She was admitted to the Bar in the State of Arizona in 1975 and to the State of New York’s Bar the following year. She was admitted to the Bar of the United States Court of Appeals for the Second Circuit in 1982, and the Bar for the Supreme Court of the United States in 1984.

From 1975-1977, she served as Special State Assistant Attorney General in the Office of the New York State Prosecutor. She then went into private practice at Skadden, Arps, Slate, Meagher & Flom where she was a Litigation Associate from 1977-1980. She became a Litigation Partner at Anderson Kill & Olick, P.C. in 1980, where she remained until 1986.

She is the author of many lectures, including Looking for ‘Bodily Injury’: What Triggers Coverage Under a Standard Comprehensive General Liability Insurance Policy and The Other Insurance Clause. She is also the author and co-author of many articles, including Plea Bargaining in the Shadow of Death (co-author with Joseph L. Hoffmann and Steven W. Fisher) and A Ten-Point Proposal for an Asbestos Superfund (co-author with Eugene R. Anderson). In 2019, Judicial Notice published her article, New York State’s Recent Judicial Collaboration with Indigenous Partners: The Story of New York’s Federal-State-Tribal Courts and Indian Nations Justice Forum (pgs. 21-33).

Marcy Kahn is the co-chair/chair for the New York Tribal Courts Committee for the New York State Unified Court System since 2002. She, along with Bronx Supreme Court Justice Edward Davidowitz, created “a group that would promote understanding and reduce jurisdictional conflict between the justice systems of New York’s indigenous tribal nations and the federal and state courts.” The New York Federal-State-Tribal Courts and Indian Nations Justice Forum tries to maintain open dialogues between federal, state, and tribal courts about matters that traverse jurisdictional lines. The forum persuaded “the New York Administrative Board of the Courts [to] adopt a joint recommendation to recognize orders, judgements and decrees of tribal courts based upon New York’s common law comity doctrine and CPLR Article 53 (NYLJ, Aug. 5, 2014).” She is known for her ability to successfully represent marginalized communities.

Associate Justice Kahn has served as the co-chair/ chair for the Capital Cases Judicial Resources Committee for the New York State Unified Court System since 1995. She is also the chair of Judicial Opportunities Committee for the National Association of Women Judges, District 2 since 2002. In 2016, she co-chaired “a new commission to address LGBT concerns with the justice system and the legal profession” with Elizabeth Garry of the Third Department.

She is also the first openly lesbian judge in the New York City Criminal Court. Kahn is known for her fierce advocacy since the beginning of AIDS crisis in the 1980s. She was also very vocal in 2017 when a new amendment “aimed at broadening protection for certain LGBTQ communities members ha[d] been proposed for the state court system’s policies on nondiscrimination.”

She cites her most important decision as People v. Phillips 14 Misc. 3d 1221 (N.Y. Misc. 2007). In this case, “James Phillip was convicted of attempted murder of his estranged wife in the lobby of her building… [but] he suffered from transcortical motor aphasia (a condition that causes speech and motor impairments).” Kahn worried that Phillips would not be able to obtain a fair trial and attempted to accommodate him so that he could comprehend the case. Although ultimately convicted, Phillips was granted a fair trial due to the intervention of Associate Justice Marcy L. Kahn.

She retired from the Appellate Division, First Department in September 2019 “to become an advocate on climate change, sustainable development, human rights and the rule of law.”

*This biography was written by Kaleigh McCormick in June 2019. At the time of authorship, Ms. McCormick was a rising sophomore at Columbia University in New York City.