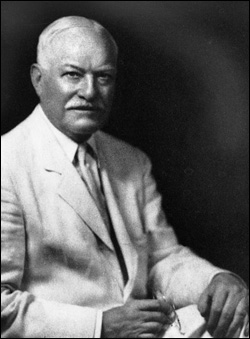 Justice Gilbert D.B. Hasbrouck was born at Port Ewen, Town of Esopus, in Ulster County on February 19, 1860. He attended the public schools, the New Paltz Academy, and then Rutgers College, graduating from the latter in 1880. He studied law with W.S. Kenyon in Kingston and attended Columbia Law School during 1881 and 1882. He obtained a masters degree from Rutgers in 1883. He was admitted to the Bar on May 28, 1882, and at once entered the office of County Judge A.T. Clearwater, where he remained until the beginning of October 1883. He began his law practice at Rondout, Ulster County. In 1894, he formed a partnership with Walter N. Gill at Kingston and in 1899 with Russell S. Johnson at New York City, which continued until December 21, 1904. He was elected Assemblyman in 1883 and in 1885. He was corporation counsel of Kingston from 1887 to 1894. In 1895, he served as second deputy Attorney General; he served as first deputy Attorney General from 1896 to 1899. He had been a candidate for the Republican nomination for Attorney General in 1893. His opponents were John Woodward of Chautauqua (who would later serve on the Appellate Division) and Theodore E. Hancock of Syracuse. The race was close and Justice Hasbrouck threw his support to Hancock, who won the nomination and election and later rewarded Justice Hasbrouck with his position as deputy Attorney General. Effective January 1, 1902, Gov. Odell appointed him a judge of the Court of Claims; he was promoted to Presiding Judge on December 1, 1903. On December 16, 1904, he was appointed to the Supreme Court for the Third Judicial Department to fill the vacancy that occurred when Justice Herrick resigned to run for Governor. During his service on the trial bench, he maintained his chambers in Albany, commuting almost daily between Kingston and Albany, because there were two trial and special term justices resident in Kingston and none in Albany. He was unable to secure the nomination for Supreme Court for the 1905 election. He returned to his law practice. In 1912, he won the nomination and election for a seat on the Supreme Court. He served on the Appellate Division, Third Department, from September 12, 1922 to November 24, 1923, when he resigned and returned to the trial bench. He was re-elected to the Supreme Court in 1926. On January 18, 1928, Gov. Smith again appointed him to the Appellate Division, where he remained until his retirement at the end of 1930. In 1927, he was chairman of the sesquicentennial celebration of the organization of State government at Kingston. Justice Hasbrouck was of Huguenot descent. One of his ancestors, Jean Hasbrouck, fled from Calais, France, in 1666 to escape religious persecution and settled in New Paltz as one of that community’s patentees. The Hasbrouck family had a long history of public service in Ulster County prior to Justice Hasbrouck’s birth; three Hasbroucks were Congressmen. The judge was an avid fisherman. He died on June 5, 1942.