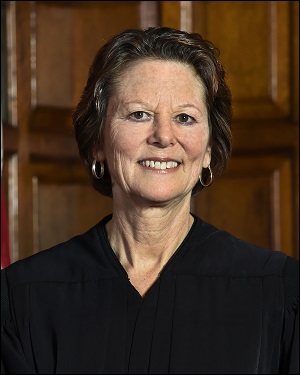 Leslie E. Stein was born in New York, New York in 1956. She received her B.A., Phi Beta Kappa, from Macalester College and her J.D., Magna Cum Laude, from Albany Law School. Judge Stein began her legal career as the law clerk to the Schenectady County Family Court Judges. She then became associated with the Albany law firm of McNamee, Lochner, Titus & Williams, P.C., where she practiced matrimonial and family law, and became a partner in the firm. While a practicing attorney, Judge Stein was elected a Fellow of the American Academy of Matrimonial Lawyers. She began her judicial career as an Albany City Court Judge and Acting Albany County Family Court Judge. She was then elected to the New York State Supreme Court, Third Judicial District for a term commencing January 2002. She served as the Administrative Judge of the Rensselaer County Integrated Domestic Violence Part from January 2006 until February 2008, when she was appointed a Justice of the New York State Appellate Division, Third Department. In October 2014, Judge Stein was nominated by Governor Andrew M. Cuomo to serve as an Associate Judge of the Court of Appeals and her nomination was confirmed by the New York State Senate on February 9, 2015.

Judge Stein is co-chair of the NYS Unified Court System Family Violence Task Force. She was a founding member of the New York State Judicial Institute on Professionalism in the Law and chaired the Third Judicial District Gender Fairness Committee from 2001 – 2005. She has also served on the Executive Committee of the Association of Justices of the Supreme Court of the State of New York, as Secretary-Treasurer of the New York State Association of City Court Judges, and as a member of the Board of the New York Association of Women Judges. Judge Stein has lectured and developed curricula for continuing legal education of attorneys and judges on multiple topics. She has a long history of involvement in various state and local bar associations and in a number of other professional and civic organizations. She resides with her husband, Mark R. Sonders, in Albany, New York.