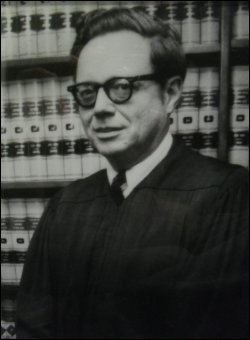 Justice Theodore R. Kupferman was known as the Great Dissenter of the Appellate Division, First Department. According to The New York Law Journal, he was “famous for his one-page dissents, usually written with a punch line.” In one, he wrote, “It does not take Gertrude Stein to know that a contract is a contract is a contract.” His dissents outnumbered his majority opinions, 625 to 165. His former law clerks called themselves “The Rough Writers,” in honor of Justice Kupferman’s hero and namesake, Theodore Roosevelt.

Theodore Roosevelt Kupferman was born May 12, 1920, in New York City. He graduated from DeWitt Clinton High School and City College of New York, where he was elected to Phi Beta Kappa. He received his law degree from Columbia Law School, where he was editor of the Law Review. He was admitted to the Bar in 1943. At the beginning of his career during the 1940s and ’50s, he worked in the legal departments of Warner Brothers Pictures, NBC Television and Cinerama Productions. From 1948 to 1949, he served as law secretary to Presiding Justice David W. Peck of the Appellate Division, First Department, perhaps laying the groundwork for his future there.

While starting his political career, Kupferman was an assistant and adjunct professor of law at New York Law School from 1959 to 1964. He served as counsel and legislative assistant to Stanley M. Isaacs, the New York City Council minority leader, from 1958 to 1962. After Isaacs died in 1962, Kupferman was elected to succeed him, and remained in City Council until 1966. During that year he was elected to Congress, by special election, to represent the 17th District of New York (“Silk Stocking District”), filling a vacancy left when John V. Lindsay became Mayor of New York City. He was reelected to the Ninetieth Congress and remained there until 1969, at which time he was appointed justice of the New York State Supreme Court by Governor Nelson Rockefeller. Kupferman was elected later that year to a full term. Two years later, he was appointed to the Appellate Division, First Department by Governor Rockefeller.

After his retirement from the bench in 1996, Kupferman returned to the practice of law, joining his daughter and son-in-law at Tunick, Kupferman & Creadore. He was hired in 1998 by the Patrolmen’s Benevolent Association to conduct an inquiry into its financial affairs after it had been the subject of a two-year federal investigation.

Justice Kupferman was married to Dorothee Hering Kupferman, with whom he had two children. After her passing, he later married Fran Liner Kupferman and gained a stepdaughter. He died on September 19, 2003, at age 83, of complications from urological surgery.