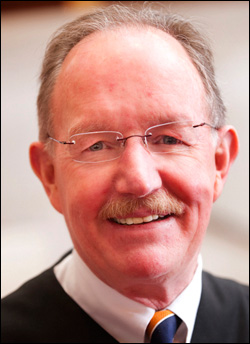 Justice Malone also sat on the bench of the 1st Department; more information can be found HERE.

Justice Bernard J. Malone Jr. was appointed to the Appellate Division, Third Department effective February 11, 2008. He is a graduate of Niagara University and Albany Law School. Justice Malone served in the United States Army form 1965 to 1969, serving as an officer in the Vietnam War. After admission to practice in 1973, Justice Malone was an Assistant District Attorney in Albany County and engaged in the private practice of law in Albany from 1974 until 1982. He served as an Assistant United States Attorney for the Northern District of New York from 1982 until 1998. He was appointed to the Supreme Court in early 1998 and elected in November of that year to a 14-year term. He was appointed an Associate Justice of the Appellate Division, First Department, in August 2005. Justice Malone is a member of the Board of Trustees of Albany Law School.