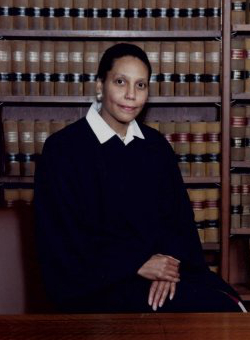 In 2013, Judge Abdus-Salaam was appointed to the Court of Appeals. See her full biography HERE.

The first African-American woman to serve on the New York State Court of Appeals, Sheila Abdus-Salaam has dedicated her entire career to public service.

Born Sheila Turner on March 14, 1952, in Washington, D.C., to working-class parents, she grew up with six siblings. She has said that she became interested in the law after watching TV shows like “East Side, West Side” and “Perry Mason.” In the late 1960s, lawyer and civil rights activist Frankie Muse Freeman visited Abdus-Salaam’s high school and made quite an impression on the young girl. Years later, Abdus-Salaam said of Freeman, “She was riveting . . . she was doing what I wanted to do: using the law to help people.” (Sheila Abdus-Salaam ’77: Strong Foundations, Columbia Law School Magazine, Spring 2012.)

Judge Abdus-Salaam graduated from Barnard College in 1974 with a bachelor’s degree in economics and received her law degree in 1977 from Columbia University School of Law, where she was a Charles Evans Hughes Fellow. She began her legal career in 1977 as a staff attorney at East Brooklyn Legal Services Corporation. Three years later she joined the New York State Department of Law as an assistant attorney general in the Civil Rights and Real Estate Financing bureaus, where she remained until 1988. During that year, she became general counsel for the New York City Office of Labor Services, serving until 1991, the year of her election to the New York City Civil Court bench and the beginning of her distinguished judicial career.

Judge Abdus-Salaam spent two years as a Civil Court judge, until 1993, when she was elected to the Supreme Court of the State of New York for New York County. As a Supreme Court justice, she first sat on the Criminal Term during 1994 and 1995. In 1996, she was assigned to the Civil Term, where she remained until March of 2009, at which time Governor David A. Patterson appointed her to the Appellate Division, First Department.

In April of 2013, Governor Andrew Cuomo nominated Judge Abdus-Salaam to the New York State Court of Appeals to fill a vacancy created by the untimely death of Judge Theodore Jones Jr. in November 2012. Cuomo said in a statement: ” … Rising from working class roots to serve for decades on the bench of the New York State Supreme Court, Justice Abdus-Salaam has a deep understanding of the everyday issues facing New Yorkers, as well as the complex legal issues that come before the state’s highest court.” (Governor Cuomo Announces Nomination for Court of Appeals, Press Release, April 5, 2013, available at: http://www.governor.ny.gov.)

Judge Abdus-Salaam has served on the boards of Contemporary Guidance Services Inc. and Women’s Housing Education and Development Corporation. She also serves as a vice chair of the Columbia Law School Board of Visitors. A former member of the Pattern Jury Instructions Committee, the judge has also chaired the Board of Directors of Harlem Legal Services.