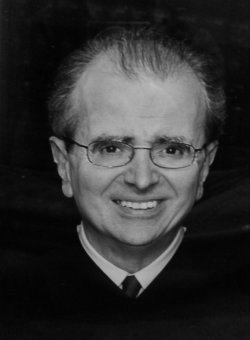 In 2009, Judge Lippman was appointed as the Chief Judge of the State of New York. See his full biography HERE.

Chief Judge Jonathan Lippman has enjoyed a career in the court system spanning more than four decades. Starting as an entry level court attorney in Supreme Court, New York County, Judge Lippman went on to serve as the longest tenured Chief Administrative Judge in state history, as the Presiding Justice of the Appellate Division, First Department, and now as the Chief Judge of the State of New York and the Court of Appeals.

Upon appointing him Chief Judge in January 2009, Governor Paterson noted that, “As chief administrative judge from January 1996 to May 2007, Judge Lippman led the implementation of nationally significant reforms, including jury reform, contributed to the creation of problem-solving courts, such as specialized drug courts and domestic violence courts, and played an integral role in keeping the courts open after the attacks on September 11.” Chief Judge Lippman’s career in the courts has been marked by a deep commitment to fostering a judicial system that is independent, accountable, modern and responsive to the people it serves. He has pursued these goals with a work ethic, energy and passion that have been described as legendary. He is widely respected in legal and governmental circles for his competence, credibility and encyclopedic knowledge of the courts.

In 1977, after service as a law clerk in Supreme Court and Surrogate’s Court, he became Principal Court Attorney for Supreme Court, New York County, Civil Term. In 1983, he was named the Chief Clerk and Executive Officer of that court, a position he held until 1989 when he was appointed Deputy Chief Administrator for Management of the statewide court system. In 1995, he was appointed to the New York Court of Claims by Governor George E. Pataki, who subsequently reappointed him to a full nine-year term on that court in 1998. In 2005, he was elected as a Justice of the Supreme Court for the Ninth Judicial District. He also served as an Associate Justice of the Appellate Term for the Ninth and Tenth Judicial Districts.

In May 2007, Judge Lippman was appointed Presiding Justice of the Appellate Division of the Supreme Court, First Department, by Governor Eliot Spitzer. In that capacity, he reaffirmed the First Department’s reputation as one of the most influential appellate courts in the country while improving the court’s timeliness and eliminating a large backlog of appeals (Daniel Wise, First Department Sharply Cuts Decision Delays and Backlog, New York Law Journal, Sept. 25, 2008). As Presiding Justice, Judge Lippman also served on the Administrative Board of the Courts, the policy and rule making body of the New York State Court System.

In January 2009, Judge Lippman was appointed Chief Judge of the State of New York by Governor David A. Paterson. As Chief Judge of the State and Chief Judge of the Court of Appeals, he presides over New York’s highest court while heading a statewide court system with a $2.7 billion budget, 3,600 state and locally paid judges and over 16,000 non-judicial employees in over 350 locations around the State. At the Court of Appeals, Chief Judge Lippman has authored a number of landmark opinions addressing constitutional, statutory and common law issues shaping the law of our state, the contours of state government and the lives of all New Yorkers.

Throughout his career, Chief Judge Lippman has been active in court improvement efforts at the national level, serving as the President of the Conference of State Court Administrators (COSCA), as a member of the Conference of Chief Justices (CCJ), and as Vice-Chair of the Board of the National Center for State Courts. In 2008, Judge Lippman received the William H. Rehnquist Award for Judicial Excellence, presented each year by the nation’s Chief Justice to a state court judge who exemplifies the highest level of judicial excellence, integrity, fairness and professional ethics. Judge Lippman was selected for his “unparalleled ability to promote and achieve reform in the state courts. His leadership in the New York courts has contributed to numerous improvements in that state’s justice system and has served as an example for courts across the country.”

Chief Judge Lippman resides in Manhattan and Rye Brook with his wife, Amy. Their two children, Russell and Lindsay, are also attorneys.