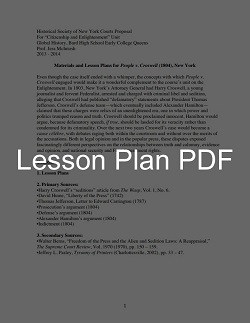 The case of People v. Croswell discusses concepts of criminal libel and sedition, in which Harry Croswell was accused of publishing defamatory statements about President Thomas Jefferson. Croswell’s defense argued that the charges were relics of an unenlightened era, where power and politics trumped reason and truth. Both in legal opinion and in the popular press, this unit, and these disputes, expose different perspectives on the relationships between truth and calumny; evidence and opinion; and national security and First Amendment rights.