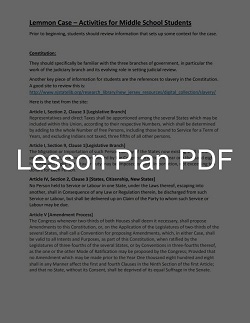 The Lemmon Slave Case provides students of U.S. history a window into the legal challenges and moral conflicts over slavery before the Civil War. This case requires a close examination of federal and state law. The New York courts freed slaves brought into the free state, while the United States Supreme Court decided Dred Scott was not free though he had traveled to a free state with his master’s family. Many curricula place a strong emphasis on the Dred Scott decision, but the Lemmon case shifts focus to New York and allows students to contemplate state’s rights implications and the interpretation of the law through a lens of human equality.

Chester Arthur
Lawyer for the Slaves

John Jay
Lawyer for the Slaves

Erastus Culver
Lawyer for the Slaves

Appeals to the Court of Appeals