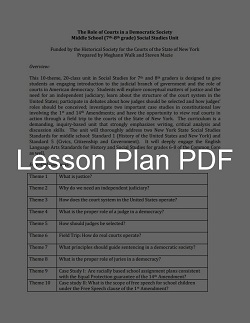 The purpose of this unit plan is to provide an introduction to the judicial branch of government and the role of the courts in American democracy. Students learn about conceptual matters of justice and the need for an independent judiciary; the structure of the court system in the United States; and how judges should be selected and how their roles should be conceived. Students also have the opportunity to view courts in action through a field trip to some of New York State’s courts while developing writing, critical thinking, and discussion skills.

The Historical Society’s website contains a wealth of related resources, including mini-biographies of the lawyers and judges included in the lesson.

The Federalist Papers
Written by Hamilton, Madison, and Jay

NY Ratification of the US Constitution
Transcript