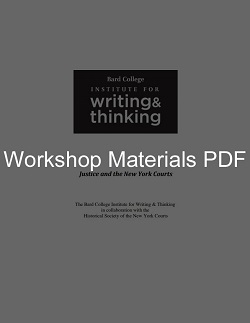 Justice and the New York Courts is a professional development workshop produced in partnership with the Society and Bard College Institute for Writing and Thinking. The workshop is geared to middle and high school teachers of Social Studies and English Language Arts, and aims to bring writing-rich pedagogical strategies into the classroom through the teaching of primary historical legal sources.

The workshops revolved around the question: What is the nature of an independent judiciary and what is its critical importance to our Federalist system of checks and balances? Texts used among others are Alexander Hamilton’s famous dissertation on the federal judiciary in The Federalist Papers (Federalist #78); the Preamble to the United States Constitution; the seminal New York 1860 slave case State of New York v. Lemmon; a contemporaneous journalistic response to this case; and recent articles addressing current debates and considerations surrounding the proper role of the judiciary.

Also included here as a PDF are the 5-12 (2016) grade common core requirements for literacy in History and Social Studies. While these requirements may evolve over time, they provide a general and helpful rubric for evaluating pedagogical strategies that promote discerning comprehension and effective communication.

The Historical Society’s website contains a wealth of related resources, including mini-biographies of the lawyers and judges included in the lesson.

The Federalist Papers
Written by Hamilton, Madison, and Jay

NY Ratification of the US Constitution
Transcript

Chester Arthur
Lawyer for the Slaves

John Jay
Lawyer for the Slaves

Erastus Culver
Lawyer for the Slaves