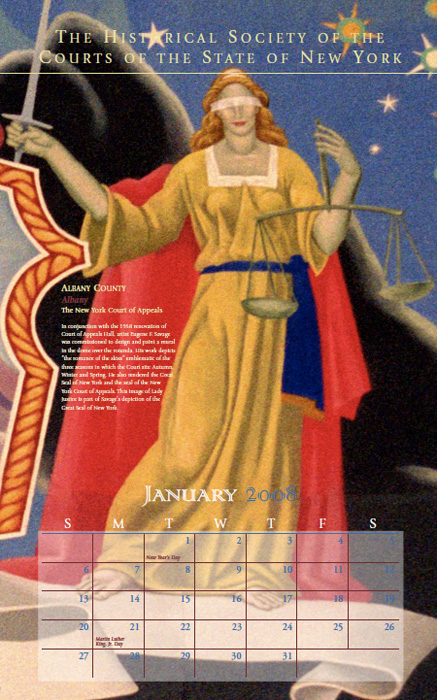 In conjunction with the 1958 renovation of Court of Appeals Hall, artist Eugene F. Savage was commissioned to design and paint a mural in the dome over the rotunda. His work depicts ‘the romance of the skies’ emblematic of the three seasons in which the Court sits: Autumn, Winter and Spring. He also rendered the Great Seal of New York and the seal of the New York Court of Appeals. This image of Lady Justice is part of Savage’s depiction of the Great Seal of New York. 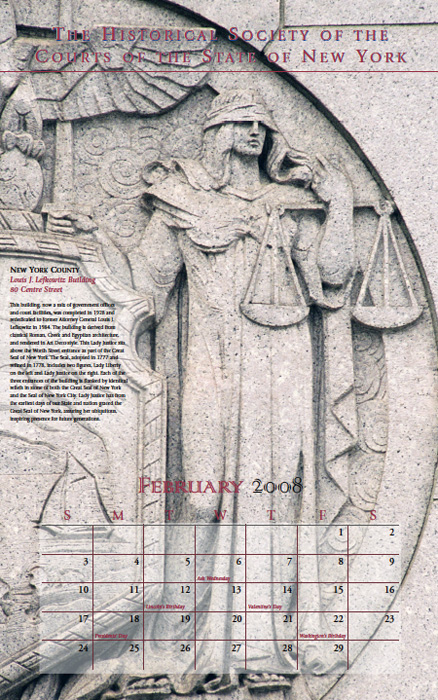 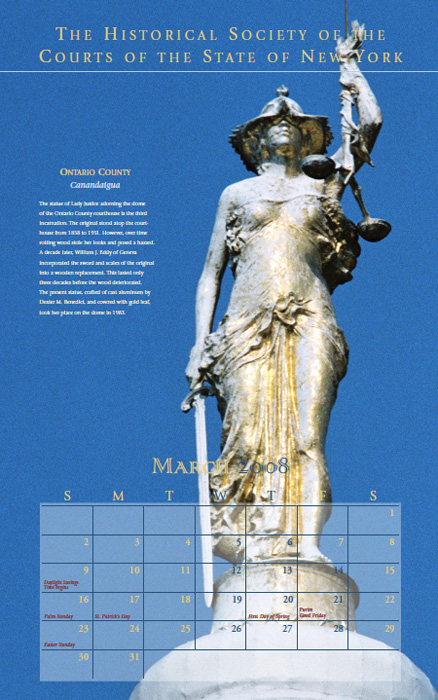 The statue of Lady Justice adorning the dome of the Ontario County courthouse is the third incarnation. The original stood atop the courthouse from 1858 to 1951. However, over time rotting wood stole her looks and posed a hazard. A decade later, William J. Eddy of Geneva incorporated the sword and scales of the original into a wooden replacement. This lasted only three decades before the wood deteriorated. The present statue, crafted of cast aluminum by Dexter M. Benedict, and covered with gold leaf, took her place on the dome in 1983. 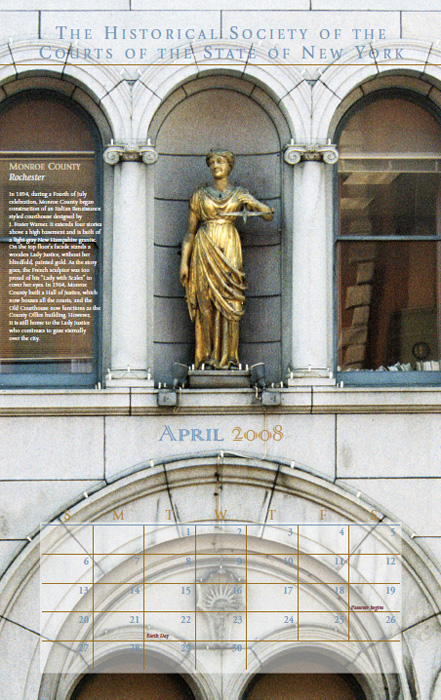 In 1894, during a Fourth of July celebration, Monroe County began construction of an Italian Renaissance styled courthouse designed by J. Foster Warner. It extends four stories above a high basement and is built of a light-gray New Hampshire granite. On the top floor’s facade stands a wooden Lady Justice, without her blindfold, painted gold. As the story goes, the French sculptor was too proud of his ‘Lady with Scales’ to cover her eyes. In 1964, Monroe County built a Hall of Justice, which now houses all the courts, and the Old Courthouse now functions as the County Office building. However, it is still home to the Lady Justice who continues to gaze eternally over the city. 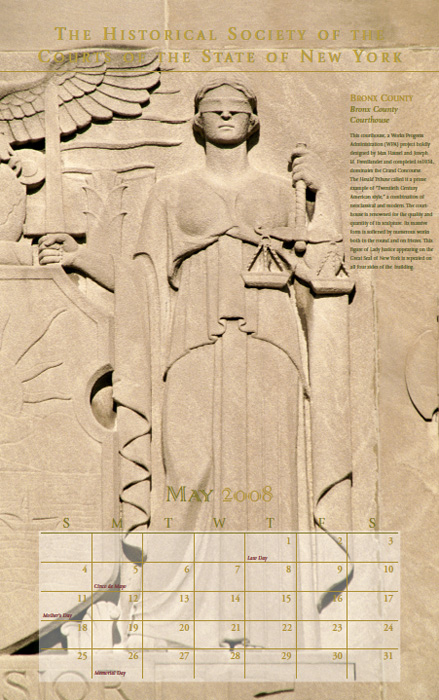 This courthouse, a Works Progress Administration (WPA) project boldly designed by Max Hausel and Joseph H. Freedlander and completed in1934, dominates the Grand Concourse. The Herald Tribune called it a prime example of ìTwentieth Century American style,î a combination of neoclassical and modern. The courthouse is renowned for the quality and quantity of its sculpture. Its massive form is softened by numerous works both in the round and on friezes. This figure of Lady Justice appearing on the Great Seal of New York is repeated on all four sides of the building. 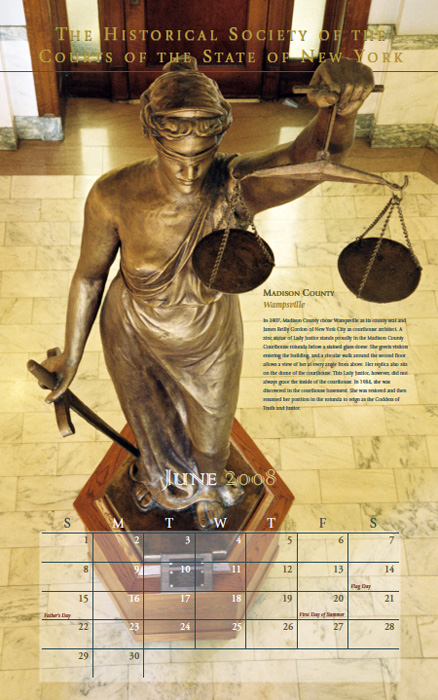 In 1907, Madison County chose Wampsville as its county seat and James Reilly Gordon of New York City as courthouse architect. A zinc statue of Lady Justice stands proudly in the Madison County Courthouse rotunda below a stained glass dome. She greets visitors entering the building, and a circular walk around the second floor allows a view of her at every angle from above. Her replica also sits on the dome of the courthouse. This Lady Justice, however, did not always grace the inside of the courthouse. In 1984, she was discovered in the courthouse basement. She was restored and then resumed her position in the rotunda to reign as the Goddess of Truth and Justice. 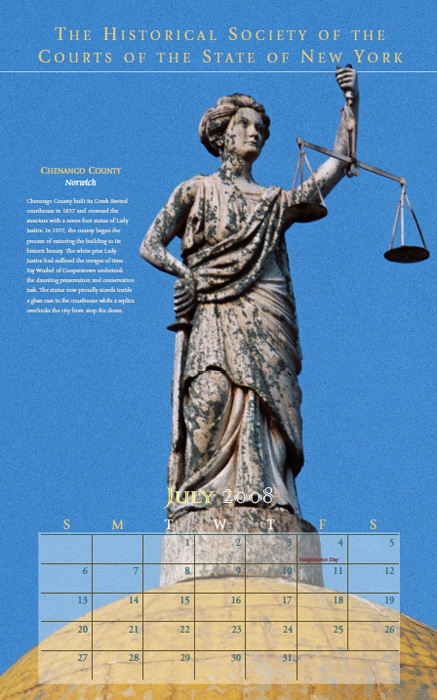 Chenango County built its Greek Revival courthouse in 1837 and crowned the structure with a seven-foot statue of Lady Justice. In 1977, the county began the process of restoring the building to its historic beauty. The white-pine Lady Justice had suffered the ravages of time. Fay Wrubel of Cooperstown undertook the daunting preservation and conservation task. The statue now proudly stands inside a glass case in the courthouse while a replica overlooks the city from atop the dome. 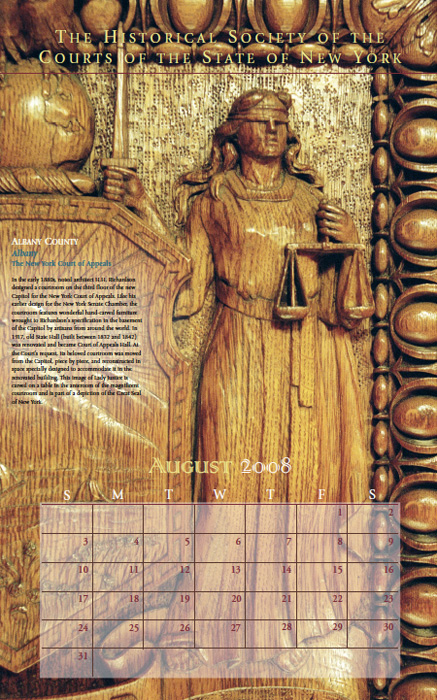 In the early 1880s, noted architect H.H. Richardson designed a courtroom on the third floor of the new Capitol for the New York Court of Appeals. Like his earlier design for the New York Senate Chamber, the courtroom features wonderful hand-carved furniture wrought to Richardson’s specification in the basement of the Capitol by artisans from around the world. In 1917, old State Hall (built between 1832 and 1842) was renovated and became Court of Appeals Hall. At the Court’s request, its beloved courtroom was moved from the Capitol, piece by piece, and reconstructed in space specially designed to accommodate it in the renovated building. This image of Lady Justice is carved on a table in the anteroom of the magnificent courtroom and is part of a depiction of the Great Seal of New York. 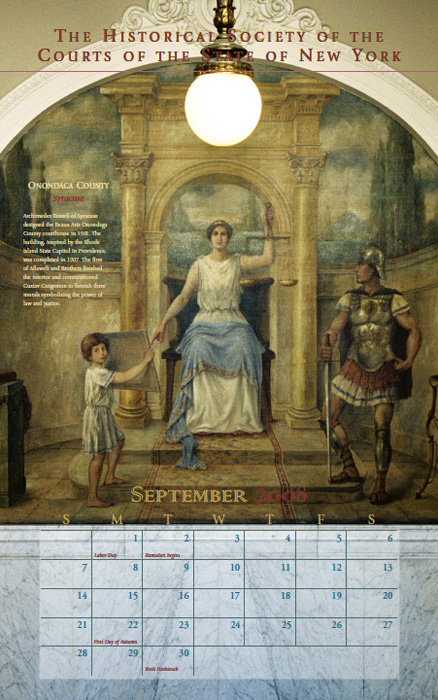 Archimedes Russell of Syracuse designed the Beaux Arts Onondaga County courthouse in 1901. The building, inspired by the Rhode Island State Capitol in Providence, was completed in 1907. The firm of Allewelt and Brothers finished the interior and commissioned Gustav Gutgemon to furnish three murals symbolizing the power of law and justice. 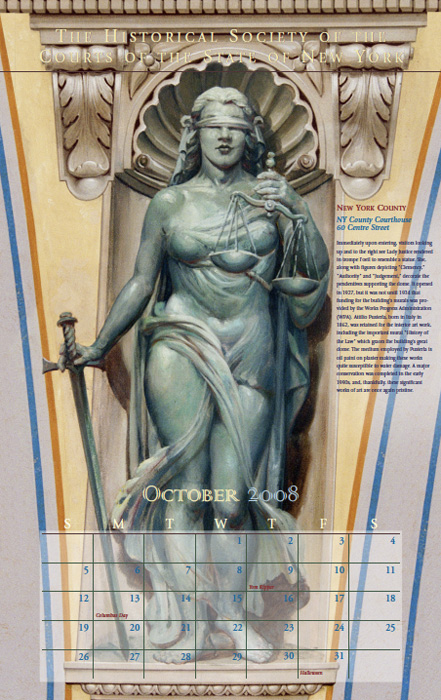 Immediately upon entering, visitors looking up and to the right see Lady Justice rendered in trompe l’oeil to resemble a statue. She, along with figures depicting ‘Clemency,’ ‘Authority’ and ‘Judgement,’ decorate the pendentives supporting the dome. It opened in 1927, but it was not until 1934 that funding for the building’s murals was provided by the Works Progress Administration (WPA). Attilio Pusterla, born in Italy in 1862, was retained for the interior art work, including the important mural ‘History of the Law’ which graces the building’s great dome. The medium employed by Pusterla is oil paint on plaster making these works quite susceptible to water damage. A major conservation was completed in the early 1990s, and, thankfully, these significant works of art are once again pristine. 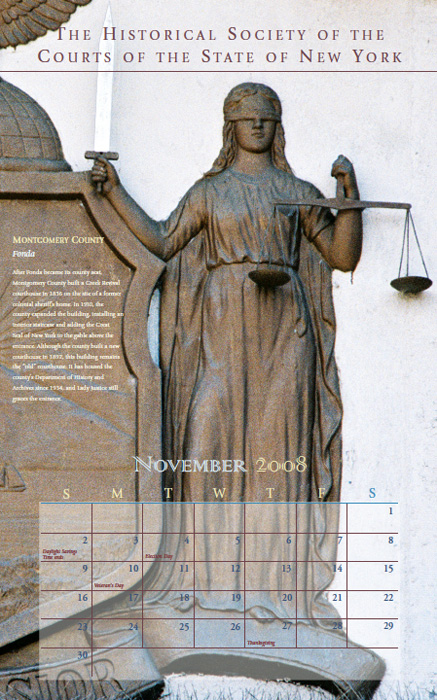 After Fonda became its county seat, Montgomery County built a Greek Revival courthouse in 1836 on the site of a former colonial sheriff’s home. In 1910, the county expanded the building, installing an interior staircase and adding the Great Seal of New York to the gable above the entrance. Although the county built a new courthouse in 1892, this building remains the ‘old’ courthouse. It has housed the county’s Department of History and Archives since 1934, and Lady Justice still graces the entrance. 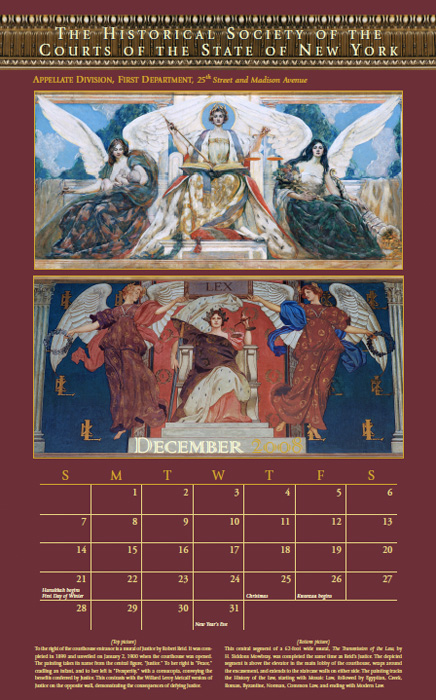 (Top picture): To the right of the courthouse entrance is a mural of Justice by Robert Reid. It was completed in 1899 and unveiled on January 2, 1900 when the courthouse was opened. The painting takes its name from the central figure, ‘Justice.’ To her right is ‘Peace,’ cradling an infant, and to her left is ‘Prosperity,” with a cornucopia, conveying the benefits conferred by Justice. This contrasts with the Willard Leroy Metcalf version of Justice on the opposite wall, demonstrating the consequences of defying Justice.

(Bottom picture): This central segment of a 62-foot wide mural, The Transmission of the Law, by H. Siddons Mowbray, was completed the same time as Reid’s Justice. The depicted segment is above the elevator in the main lobby of the courthouse, wraps around the encasement, and extends to the staircase walls on either side. The painting tracks the History of the law, starting with Mosaic Law, followed by Egyptian, Greek, Roman, Byzantine, Norman, Common Law, and ending with Modern Law.