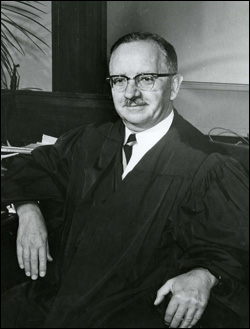 Justice Halpern also sat on the bench of the 3rd Department; more information can be found HERE.

Philip Halpern was born on November 12, 1902 in Buffalo, where he went to public schools, then to the Law School of the University of Buffalo from which he received a degree in 1923. He studied for a year at the New School for Social Research in New York during 1923 and 1924. He was admitted to the bar in the latter year.

Initially, Halpern worked in the Legal Department of the Brooklyn-Manhattan Transit Co. In 1926, he relocated to Buffalo, and set up a solo practice which he maintained until 1931, at which time he joined a partnership. He also took on a position as Professor at the University of Buffalo Law School, which he maintained until 1943. He later had a tour as dean of the School. Among other undertakings, he was counsel to the Committee on Practice and Evidence of the State Commission on the Administration of Justice from 1931-34, founder and for a time Editor of The Erie County Bar Bulletin, Vice-President of the Western New York Federation of Bar Associations, and a member of the American Law Institute.

Halpern largely abandoned these responsibilities during World War II, when he enlisted in the Army. During his stint in the service, he also acted as a Referee for the National War Labor Board and was a member of the Enemy Aliens Board. He was discharged in 1944.

At this point, Halpern was hired as Counsel to the State Public Service Commission, which he held in addition to his teaching duties and private practice. In 1947 he gave it up and was elected to the State Supreme Court for the Eighth District. He remained a trial judge for four years. In 1952 he was appointed to the Appellate Division of the Third Department where he sat until his transfer to the Fourth Department in 1958. In 1961, Justice Halpern was named to the State Commission on Revision of the Penal Law and Code of Criminal Procedure. During his career he represented the United States on the United Nations Sub-commission on Prevention of Discrimination and Protection of Minorities and, with the late Mrs. Franklin D. Roosevelt, was a member of the Advisory Council to the United States Delegation to the United Nations Commission on Human Rights. He was on this Court at the time of his death in the Fall of 1963.