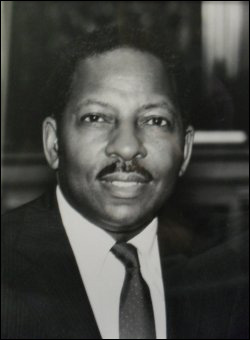 In 1992, Judge Smith was appointed to the Court of Appeals. See his full biography HERE.

A Freedom Rider and veteran of the civil rights movement, George Bundy Smith has enjoyed a career marked by selfless devotion to public service.

Smith was born in 1937 in New Orleans, Louisiana, and was raised in racially segregated Washington, D.C., with his twin sister, Inez, and older brother, Sidney, Jr. The experience of growing up in a segregated society left an indelible impression on him. He excelled in the public schools of Washington, D.C., earning a full scholarship to Phillips Andover Academy in Andover, Massachusetts. He was the only African American student in his class. He went on to Yale University (one of 4 African Americans in a class of 1,000) and graduated in 1959. He embarked upon a legal career and applied to Yale Law School, along with his sister Inez. They were both admitted and received their law degrees in 1962. By 1995, both Judge Smith and his twin sister, now Judge Inez Smith Reid, would be sitting on the highest state appellate courts in New York and the District of Columbia, respectively. Judge Smith continued his education by obtaining graduate degrees at New York University ( M.A., 1967, and Ph.D., 1974) and the University of Virginia Law School (graduate program for judges — master’s degree in the judicial process, 2001).

In May 1961, while attending Yale Law School and in the midst of exams, Judge Smith joined the Freedom Rides to the segregated South to advocate integration. He was soon arrested with other notable African Americans and convicted for sitting down and ordering coffee at a bus terminal lunch counter. Their convictions were overturned in 1965 by a unanimous U.S. Supreme Court.

After law school, Judge Smith decided to use his legal expertise to advance the cause of civil rights. He began his career at the NAACP Legal Defense and Education Fund, where, among other things, he drafted appellate briefs in the successful effort to gain admission for James Meredith to the University of Mississippi. After leaving the NAACP in 1964, he served as law secretary to Civil Court Judge Jawn Sandifer (1964-1967), a former civil rights attorney; Supreme Court Justice Edward Dudley (1967-1971), the first African American ambassador; and Hon. Harold A. Stevens, Presiding Justice of the Appellate Division, First Department (1972-1974), and the first African American to serve on the Court of Appeals (interim appointment 1974). In 1974, Smith became the Administrator of Model Cities for New York City. Model Cities was a federally funded program developed to improve the quality of life in urban areas.

Judge Smith’s distinguished judicial career began in 1975, when he was named to an interim term on the Civil Court of New York City by Mayor Abe Beame. He was elected to a full term the following November. In 1979 he was elected to the Supreme Court bench and served in New York County from 1980 to 1986, at which time Governor Mario Cuomo appointed him to the Appellate Division, First Department. Judge Smith remained on the First Department bench until September 1992, when Governor Cuomo appointed him to the Court of Appeals. He became only the third African American ever appointed to serve on that Court. Judge Smith sat as an Associate Judge on the Court of Appeals for a full 14-year term, retiring in September 2006, when he joined Chadbourne & Parke LLP as a partner in its litigation practice.

Over the years, Judge Smith has authored a number of articles and publications, including a text for high school students co-authored with his wife, Dr. Alene Smith, You Decide: Applying the Bill of Rights to Real Cases (New York: Critical Thinking Books and Software, 1992). He has been an adjunct professor of law at Fordham University Law School since 1981 and has also taught at New York Law School and Baruch College.

Judge Smith is a staunch advocate for increasing the diversity of the bar and bench and has been actively involved in professional organizations which promote this goal. He is a founding member of the Metropolitan Black Bar Association and former President of the Harlem Lawyers Association. In addition, he has served as director of the Harlem-Dowling Westside Center for Children and Family Services and as Chair of the Board of Trustees of Grace Congregational Church.

Throughout his distinguished career, Judge Smith has received numerous awards and honors, including an honorary doctor of law degree from Fordham Law School, the Hon. William Brennan Award for Outstanding Jurist presented by the New York State Association of Criminal Defense Lawyers, the Spirit of Excellence Award from the American Bar Association’s Commission on Racial and Ethnic Diversity, and the William Nelson Cromwell Award presented by the New York County Lawyers’ Association.

The Judges of the New York Court of Appeals, A Biographical History, Albert M. Rosenblatt [ed.], The Historical Society of the Courts of the State of New York, New York, 2007, pp. 881-894.