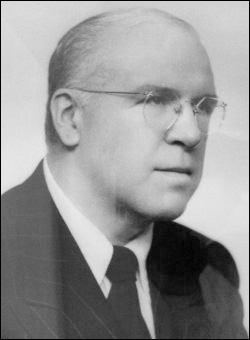 In 1963, Judge Bergan was elected to the Court of Appeals. See his full biography HERE.

Judge Bergan also sat on the bench of the 3rd Department; more information can be found HERE.

It was said of Judge Francis Bergan that he was a man of the world and of his community, who blended “a preeminent and constant purity of purpose and a perception of what the law and judges and public servants were supposed to be about — doing the right thing and serving people and the community — a simple and straightforward message and philosophy that he lived, practiced and taught.” (The Judges of the New York Court of Appeals, A Biographical History, Albert M. Rosenblatt [ed.], The Historical Society of the Courts of the State of New York, New York, 2007, p. 668.)

Francis Bergan was born in Albany, New York on April 20, 1902. He graduated from Cathedral Academy and went straight on to law school. He received his law degree from Albany Law School in 1923 while working full time as a reporter for The Knickerbocker Press in Albany. Bar admission followed the next year. It wasn’t until 1946, when he was already a Supreme Court Justice, that he received his bachelor’s degree from Siena College’s night school.

After his stint as a reporter, Judge Bergan served as assistant to the Minority Leader in the New York Assembly from 1927 through 1929. He was first elected to public office in 1929, at age 27, as a Justice of the Albany City Court. He went on to be elected Albany Police Court Justice in 1933, and then Supreme Court Justice (Third Judicial District) in 1935 (re-election following in 1949). Governor Dewey appointed him to the Appellate Division Third Department in 1949, where he remained an Associate Justice until 1960. At the same time, in 1952 he received an appointment to serve as a temporary additional Associate Justice in the Appellate Division First Department. Thus, he served simultaneously in two Appellate Divisions with a full case load in each court. In 1960 Governor Rockefeller appointed him Presiding Justice of the Appellate Division Third Department, though still sitting at times in the First Department. Judge Bergan was nominated to run for judge of the Court of Appeals in 1963 by the Democratic, Republican and Liberal parties. He succeeded in the election and began his service at the Court of Appeals in January 1964, where he remained until 1972, when he reached the mandatory retirement age.

Judge Bergan was known for several important decisions, including a landmark comparative negligence case brought against Dow Chemical. Earlier in his career, while serving as Police Court Justice, he authored legislation amending the vehicle and traffic law to decriminalize traffic violations.

He authored many essays and was also known as a historian, authoring the book The History of the Court of Appeals 1847-1932, published by Columbia University Press in 1985. Another book written by him is Opinions and Briefs, Lessons from Loughran, a book on the hows and whys of decision and brief writing.

He retired at age 70 in 1972 and then became affiliated with the Manhattan law firm of Proskauer Rose Goetz & Mendelsohn until 1985.

The Judges of the New York Court of Appeals, A Biographical History, Albert M. Rosenblatt [ed.], The Historical Society of the Courts of the State of New York, New York, 2007, pp. 661-668.