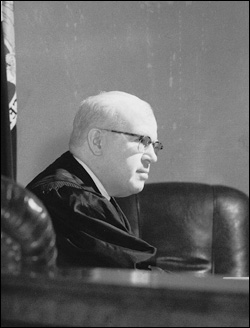 In 1963, Judge Bergan was elected to the Court of Appeals. See his full biography HERE.

Judge Bergan also sat on the bench of the 1st Department; more information can be found HERE.

Judge Francis Bergan was born in Albany on April 20, 1902. He graduated from Albany Law School in 1923. In the early 1920s, a college degree was not a prerequisite for admission. He was admitted to the Bar in 1924. He had worked as a newspaperman for both the Knickerbocker Press and the Sunday Telegram, covering legislative affairs. He served for a time as a special assistant Attorney General. He was elected Albany City Court Justice in 1929; elected Albany Police Court Justice in 1933; and, in 1935, was elected a Supreme Court Justice for the Third Judicial District; he was re-elected in 1949. He obtained his Bachelor’s Degree from Siena College in 1946, after attending classes at night while he was on the Supreme Court bench. Siena awarded him a Doctor of Laws in 1948. He was first designated to the Third Department in 1949 by Gov. Dewey. He was designated Presiding Justice in 1960 by Gov. Rockefeller. For a number of years after 1952, he was also designated a temporary additional justice for the First Department. During this period, his name appears on decisions from both the First and Third Departments. In November 1963, Judge Bergan was elected to the Court of Appeals. He was a delegate to the Constitutional Conventions of 1938 and 1967. He retired from the Court of Appeals at the age of 70 in 1972. After that, he authored, among other writings, “The History of the New York Court of Appeals, 1847 -1932” (Columbia University Press, 1985) and “The Appellate Division at Age 90: Its Conception and Birth, 1894” (New York State Bar Journal, January 1985). Judge Bergan died in 1998.