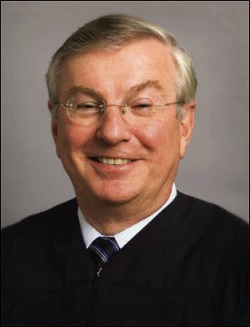 In 2006, Judge Pigott was appointed to the Court of Appeals. See his full biography HERE.

Eugene F. Pigott, Jr. received his Juris Doctor from SUNY at Buffalo School of Law in 1973. Prior to attending Law School, Justice Pigott served in the United States Army and was an Interpreter for U.S. Forces in Vietnam between 1969 and 1970. Following his admission in 1974, Justice Pigott practiced law in Buffalo with the firm of Offermann, Fallon, Mahoney & Adner from 1974 to 1982, becoming a partner in 1978. In 1982 he was appointed as Erie County Attorney and served in that position until 1986. In 1986 he became Chief Trial Counsel for the firm of Offermann, Cassano, Pigott & Greco and in 1994 he was certified as a Civil Trial Advocate by the National Board of Trial Advocacy. On February 4, 1997, he was appointed to the New York State Supreme Court by Governor George E. Pataki and was thereafter elected to a full fourteen year term. In 1998 he was designated to the Appellate Division, Fourth Department and was appointed Presiding Justice on February 16, 2000, by Governor Pataki. Justice Pigott has been a member of the American Bar Association, the Association of Trial Lawyers of America, the New York State Bar Association, the New York State Trial Lawyers Association, the Bar Association of Erie County, the Western New York Trial Lawyers Association, the Buffalo Inns of Court, Judicial Institute on Professionalism in the Law, SUNY Buffalo School of Law Dean’s Advisory Council, New York State Bar Association Special Committee on Law Practice Continuity and the Chief Judges Council. Justice Pigott has served as a member of the Vietnam Veterans Leadership Program; as a member of the Board of Directors of the Legal Aid Society of Buffalo between 1980 and 1988 and as its President from 1986 – 1988. He served as a member of the Governor’s Temporary Judicial Screening Committee between 1995 and 1996. He served on the Court until he was designated to the Court of Appeals by Governor George Pataki on September 25, 2006.