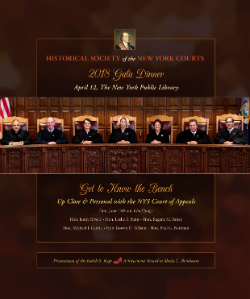 Gala Chair Robert G. Giuffra, Jr. opened the evening with welcoming remarks and introduced NYS Chief Judge Janet DiFiore. The Chief Judge continued the tradition of the presentation of the Judith S. Kaye Achievement Award. This year’s honoree was Sheila L. Birnbaum, Esq., a partner at Quinn Emanuel, who was recognized for her work in the legal field, including serving as Chair of former Chief Judge Kaye’s Commission on Fiduciary Appointments.

Marilyn Marcus, Executive Director of the Society, presented a slide show sampling Society projects of the past year, including student initiatives and programming by the Young Lawyers Committee. She then introduced the film.

The Judges of the NYS Court of Appeals took time out of their busy schedules in February, 2018 to meet in the Cardozo Room of the NYS Court of Appeals Courthouse in Albany, NY. They reflected on their early years, setting the foundation for their future careers, and how they view their important work. After individual interviews, Chief Judge DiFiore then moderated a group discussion in which the Judges discussed how their collegial body forms an important institution in the fabric of our State’s democratic process.