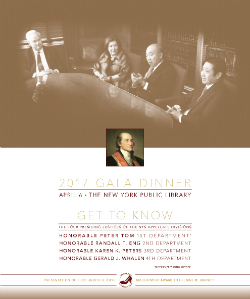 The Chief Judge then started a new tradition as she named Helaine M. Barnett, chair of the NYS Permanent Commission on Access to Justice, as the first recipient of the Judith S. Kaye Achievement Award for her devotion during her legal career to expanding access to justice for the poor.

The Society film brought together the four Presiding Justices in the chambers of Presiding Justice Randall Eng, a Society Trustee. Included were excerpts from their individual stories about their childhood backgrounds and roads to the bench drawn from longer oral histories filmed that day. The film continued with a roundtable discussion among the four, with inspiring remarks in conclusion.