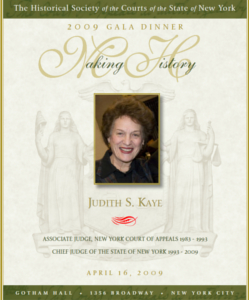 In her final year as Chief Judge, the Society recognized the historic career of Judith S. Kaye. Starting as a pioneering woman attorney in New York City, Chief Judge Kaye became the first woman judge on the Court of Appeals in 1983 before becoming New York’s first woman Chief Judge in 1993. Her tenure, stretching over 14 years, also made her the longest serving Chief Judge in the history of the state. The Society was proud to honor its Founder at the 2009 Gala.