Continuing the celebrate diversity theme for April, we’re turning to Native Americans and the New York law with Tribal Courts in New York: Case Study of the Oneida Indian Nation and Judicial Notice Issue 14. We received such positive responses to both the public program and the special issue of Judicial Notice, which featured a subject we hadn’t explored before: the role of justice in the relationships between Native Americans and New York State law.

Tribal Courts in New York was an eye-opening feature on Native American courts, through the lens of the Oneida Indian Nation. Oneida Indian Nation dancers also performed a traditional Haudenosaunee welcome dance to open the program. Issue 14 of Judicial Notice, spearheaded by Editor-in-Chief and Trustee Hon. Helen E. Freedman, highlights the history of between Native American peoples and New York’s legal system as well as current issues and collaborations. We treasure contributing to this important conversation. 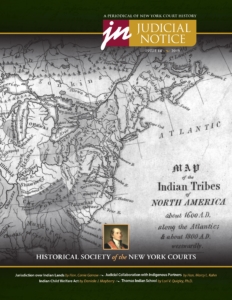