Recently appointed Appellate Division Justice Mark Montour discusses his pioneering role as the first Native American jurist in NYS as well as the work a collaborative group of federal, state, and tribal nation courts and representatives in ensuring Native Americans have equal access to justice.

This is a segment from a Dispensing Justice from a Distance Series Interview from March 24, 2021. Watch the full interview here: https://history.nycourts.gov/about_period/dispensing-justice-montour/ 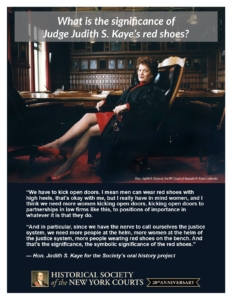 To close out our series Every Month is Black History Month, we are revisiting the important work of the court system in providing equal justice to all New Yorkers.

In January 2021, our series highlighting the individual stories of judges during the pandemic Dispensing Justice from a Distance virtually brought together Deputy Chief Administrative Judge for Justice Initiatives Hon. Edwina G. Mendelson and interviewer and NYU Law Professor Troy A. McKenzie. Judge Mendelson and Prof. McKenzie’s discussion included how the pandemic has necessitated serious changes to help all New Yorkers receive their day in court.

END_OF_DOCUMENT_TOKEN_TO_BE_REPLACED

George Boyer Vashon (1824-1878) was admitted to the New York Bar on January 11, 1848, thereafter practicing in Syracuse. He became New York’s first African American attorney, after having been rejected on the grounds of race by the Bar of his native Pennsylvania in 1847. He was admitted to the Bar of the U.S. Supreme Court in 1867.

END_OF_DOCUMENT_TOKEN_TO_BE_REPLACED

During her biweekly video message, Chief Judge Janet DiFiore this week announced the debut of The Lemmon Case: 1852-1860 — A Prelude to the Civil War, a traveling panel exhibit intended to educate the public on the role of the New York courts in paving the way for the abolition of slavery, and the subsequent freeing of eight enslaved young women and children who sailed into New York harbor with their owners from Virginia. The exhibit began a 90-week tour to 45 courthouses around the state at the Westchester County Courthouse on November 1st.

END_OF_DOCUMENT_TOKEN_TO_BE_REPLACED

Eunice Hunton Carter was the real-life heroine who inspired a character on the HBO series Boardwalk Empire. She was only the second woman in the history of Smith College to receive a bachelor’s and a master’s degree in four years. She then went on to earn a law degree from Fordham School of Law and start her own practice.

END_OF_DOCUMENT_TOKEN_TO_BE_REPLACED

Eddie Roth was a law clerk to Chief Judge Lawrence H. Cooke from 1982-84. He and fellow law clerk Jeanne Philips-Roth married in 1987. He now serves as a legal advisor to the St. Louis Metropolitan Police Department. He originally published this essay for friends and family on his Facebook page in September 2014, as a centennial tribute to Chief Judge Cooke.

October 15 marks the 107th anniversary of the date of New York Chief Judge Lawrence H. Cooke’s birth. He was a jurist of great distinction, and a person of unsurpassed decency, integrity and good cheer. I write to remember him, and to share some observations about what it meant to me to have known him.

I first met Judge Cooke in the Spring of 1981. I was 22 years old, and just completing my second year at Fordham Law School. He was Chief Judge of the New York Court of Appeals and had invited me to interview for a clerkship position that would begin following my graduation.

The interview was conducted in his home chambers at the Sullivan County Courthouse, in Monticello, New York, about 100 miles north and west of New York City. Each of the seven judges of the Court of Appeals maintain chambers in their hometowns. The judges would converge on Albany for two-week sessions, to confer and hear argument. During the three weeks in-between sessions, and over the summer, they would return to home chambers to work on writings and ready themselves for the next session, and so forth.

END_OF_DOCUMENT_TOKEN_TO_BE_REPLACED

October 16, 1916 marks the day when the first birth control clinic opened in the United States by Margaret Sanger in the Brownsville neighborhood of Brooklyn, NY — that was 105 years ago, yet the topic still resonates today. Take a deep dive on the history of family planning clinics in the nation from our extensive article from Judicial Notice Issue 9, written by Maria T. Vullo.

END_OF_DOCUMENT_TOKEN_TO_BE_REPLACED

Sojourner Truth (1797-1883) was an African American abolitionist and women’s rights activist. She was born into slavery in upstate New York, and with her infant daughter escaped to freedom in 1826. New York began to legislate for abolition of slavery in 1799, adopting emancipation legislation on July 4, 1827. The law did not provide for a specific date of collective emancipation. Rather it legislated staggered dates of freedom based on age and gender on the theory that the work force should not be overburdened. Sojourner obtained her freedom on July 4, 1827.

END_OF_DOCUMENT_TOKEN_TO_BE_REPLACED

It is with sadness that the Historical Society of the New York Courts has learned of the passing of one of our most treasured Trustees Barry H. Garfinkel following a bout of pneumonia.

Barry has been a Trustee of the Society almost since its founding. He has been a linchpin on the Board, and guided us to success in many ways. In 2007, he founded a project to bring enrichment to a segment of NYS students often overlooked — those in the State’s community colleges. The David A. Garfinkel Essay Scholarship sponsors an annual essay contest on topics of legal history relevant to many first generation and minority students. It is an opportunity for students to delve into the role of the courts in society and to connect with the courts in person through awards ceremony held each year with a luncheon where students can mingle with judges and lawyers. He has funded this initiative since its inception, and the ceremonies he attended were meaningful to him.

Barry was close to Hon. Judith S. Kaye and she chose to spend her post-court legal career at Skadden. After her death, he worked to have a room at the NYC Bar named for her.

Barry was a straight talker, sometimes gruff, but one of those rare ones who delivered when he spoke. He had a strong moral compass and saw the worth of our mission. He will be dearly missed.

See the 65th Anniversary tribute to Barry that Skadden Arps put together.

The Historical Society has been named to receive donations in his honor, and the following people have made a contribution in Barry’s memory.