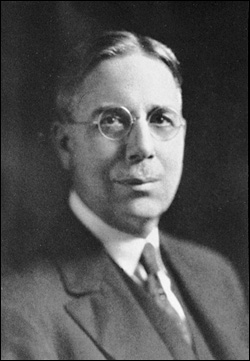 Justice Davis also sat on the bench of the 2nd and 4th Departments; more information can be found HERE and HERE, respectively.

Justice Rowland L. Davis was born in Dryden, Tompkins County. He attended the district school near McLean and graduated from the Cortland Normal School in 1896. The next year, he graduated from Cornell Law School. He was also admitted to the Bar in 1897. From 1897 to 1902, Justice Davis practiced law in Cortland with Bronson & Davis and from 1902 until 1915 with Davis & Lusk. In March 1899, he was elected a police justice of the Village of Cortland, and when the village first became a city, he was elected first city judge in 1903. Justice Davis was appointed to the Supreme Court by Gov. Whitman on August 3, 1915, to fill a vacancy. That same year, he was elected to the post; he was re-elected in 1929. In January 1921, Justice Davis was designated to the Appellate Division, Fourth Department, by Gov. Miller for a five-year term. Gov. Smith transferred Justice Davis to the Third Department in November 1926. In March 1931, Gov. Roosevelt assigned him to the Second Department. His designation to the Appellate Division was revoked at his own request in March 1939. For the next two years he held Child Terms in the Sixth Judicial District. He retired to Cortland on March 31, 1941. He died on February 2, 1954, at the age of 82.