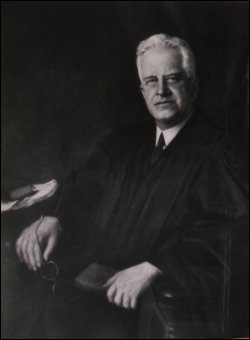 In 1935, Judge Finch was elected to the Court of Appeals. See his full biography HERE.

Justice Edward Ridley Finch can be described as a reformer during both his time as a state assemblyman and as a member of the judiciary. As to his career on the bench, he made “several contributions of long-term effect to the speedy and equitable administration of the law.” (Obituary, New York Times, September 16, 1965, p. 47.)

Edward Ridley Finch was born on November 15, 1873 in New York City, where he later attended private prep schools. He graduated from Yale University with a B.A. in 1895 and received his LL.B. from Columbia Law School in 1898. After admission to the Bar that year, he worked for several law firms. He then founded his own firm, Finch & Coleman.

In 1901 Finch was elected to the New York State Assembly where he served until 1904. He was a founder of both the Honest Ballot Association and the Child Welfare Commission. He was author of the first child-labor law introduced in the Assembly.

Governor Whitman appointed Finch to the New York State Supreme Court in 1915 to fill a vacancy. In November 1916 he was elected to a full 14-year term. Six years later, in 1922, he was appointed to the Appellate Division First Department by Governor Miller. He was subsequently reappointed by Governor Smith and then Governor Roosevelt. The latter designated him as Presiding Justice in 1931, a position he would hold until his election to the Court of Appeals in 1935.

During his long judicial career, Finch was credited with having introduced to New York courts the English practice of summary judgment. He also established the “cy pres” doctrine for all charities, which allows for organizations to use charity money for more general purposes once the more specific purposes no longer exist. In 1922 Justice Finch went to Brazil as President Harding’s Emissary Extraordinary and Minister Plenipotentiary during the Brazilian centennial observance. He resigned from the Court of Appeals in 1943 to resume private law practice at Finch & Schaefler.

Justice Finch married Mary Livingston Delafield Finch in 1913 and had three children. He died on September 15, 1965 at the age of 91.