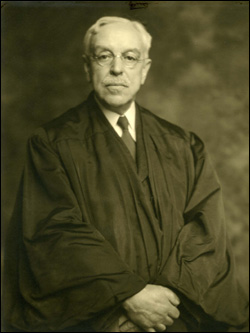 Charles Brown Sears was born in Brooklyn, New York on October 16, 1870 to Hector and Lenora C. Brown Sears. He received his secondary education at Brooklyn’s Adelphia Academy (1888), and received the A.B. from Yale University in 1892. He studied at the University of Berlin from 1892-93, was admitted to the New York bar in 1895, and completed the LL.B. at Harvard in 189(5)6. Sears subsequently received honorary LL.D. degrees from other institutions including Middleburg (Middlebury) College (Vermont), 1930; Columbia University, 1936; Yale University, 1936; Saint Lawrence University, 1939; Syracuse University, 1940; and Hobart College, 1942. He practiced law privately in Buffalo, New York from 1895-1917, beginning as a clerk with Lewis & Lewis and later with Bissell, Cary & Cooke. In 1901 he became a member of the firm of Norton, Penny & Sears, and in 1910 began an association with Rogers, Locke & Babcock. In 1915 he served as a Republican delegate for the 48th Senate District to the New York State Constitutional Convention, where he served as a member of the judiciary committee.

In 1917 his long and distinguished career in the judiciary began with an appointment to the Supreme Court for the Eighth District by Governor Charles S. Whitman. He was subsequently elected for the 1918-31 and 1932-40 terms. He also sat for five years as a trial judge. In 1922 Sears was assigned as an Associate Justice of the Appellate Division, Fourth Department, serving through 1926. He was then reassigned for the 1927-31 term and served as Presiding Justice, having been appointed by Franklin D. Roosevelt, from January 1929 to January 1940. While Presiding Justice, he was elected as a Delegate-at-large to the Constitutional Convention of 1938, serving as chairman of the judiciary committee. After eleven years as Presiding Justice, he was appointed to the Court of Appeals by Governor Herbert H. Lehman in January of 1940 to replace Judge Lehman (who became Chief Judge), remaining until his mandatory retirement at the close of 1940. He held office as an Official Referee for the remainder of his life.

Sears had a particular interest in foreign affairs, serving as President of the International Institute of Buffalo, Chairman of the Buffalo branch of the Foreign Policy Association and as a Trustee of the Buffalo Council on World Affairs. This interest came to fruition on his third judicial assignment. After a stint as a Federal hearing commissioner in the deportation proceedings concerning the labor leader Harry Bridges, Sears was dispatched to Occupied Germany and a seat on the Fourth International Military Tribunal at Nuremberg in 1946, where he remained for a year, sitting as Presiding American Judge at the trial of Frederich Flick, who became the first German businessman convicted by the tribunal. He returned to Buffalo in 1947, and died there on December 17, 1950 after having “been in ill health for some time”.

Sears had an active personal life as well. He was an Episcopalian and married twice– First on October 20, 1896 to Florence Gilbert of Brookline, Massachusetts. Florence died October 3, 1939 and he married Mary Vanderpoel Hun, who was from a well established Albany family and who had been chairman of the State Commission for the Blind, on November 24, 1946. Mary lived with him in Germany during the tribunal. For many years Sears lived in a fine home at 849 Delaware Avenue in Buffalo, NY with his Mother and wife, retaining the services of a Butler, a Cook and their son. He apparently had no children. “Judge Sears loved that city (Buffalo)…he was proud of the roaring song of its mighty industries; and greatly and grandly proud of the widespread respect and affection in which he was held by its citizens.” Of his efforts in the Court of Appeals it was once said “His younger associates in the Court of Appeals will be in everlasting debt to Judge Sears for many lessons he gave them out of his skill and experience and for the bracing example of the painstaking thoroughness with which he did his work day in and day out. He was in truth a godsend to us…”