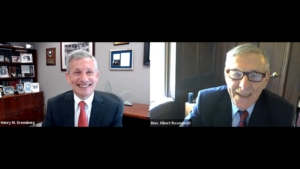 This conversation with Henry M. Greenberg, Esq. and Hon. Albert M. Rosenblatt chronicles the steps then-Chief Judge Judith S. Kaye and Judge Rosenblatt took to create a historical society honoring the courts of the state of New York. From the moments that inspired its creation in the late 1990s to its ultimate inception in 2002 and beyond, learn about the people that laid the groundwork to found this institution, along with its unique projects,  during the Society’s 20th Anniversary Season.