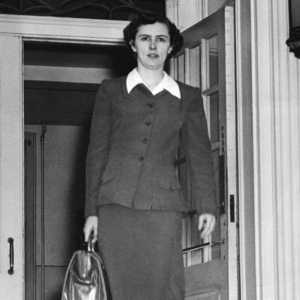 The following is an excerpt from The New York State District Attorneys Association: An Illustrated History by Albert M. Rosenblatt. We reproduce it here in memory of Ms. Smallwood-Cook, who passed away on January 26, 2013.

The comment regarding her attractiveness should not today surprise anyone who was around in 1950. What is surprising is the minuscule nature of the mention of New York State’s first woman District Attorney. Today a comment of that tenor would be unthinkable; in 1950 it would have been considered gallant, at least by the other (male) prosecutors. Charlotte Smallwood … provides us with some of her reminiscences of those years:

The January, 1950 meeting of the New York State DA’s Association was my introduction to District Attorneys from around the State. Wallace Stakel, Genesee County’s DA, warned me that I would be heckled and hazed. He advised me to pay no attention and to be myself.

The meeting has held in a ballroom. I was seated near Frank Hogan and “Mr. District Attorney of the Air.” We were two white elephants indeed.

Looking out on the assemblage, I was amazed at the number of attendees. I had expected to find one District Attorney from each County. There seemed to be hundreds.

Each person was provided with a full bottle of liquor. That seemed like overkill, but by the time it was my turn to speak, the men all seemed to be in high gear.

Following Wally Stakel’s advice, I ignored the whistles and shouts and addressed them seriously, briefly and with as much dignity as a 26 year old country girl could muster.

The next DA Association meeting I attended was held in Cooperstown. A large company, perhaps the Reader’s Digest, had supplied enough door prizes for each person there. By this time I was accepted by the others as a viable DA. The only incident which pointed up my gender occurred when my door prize number was called. It matched a beautiful briefcase. The Master of Ceremonies ceremoniously announced that they were substituting a beautiful set of luggage for the DA from Wyoming County. I stood up, thanked them for their generosity, but said I would prefer the briefcase. I proudly carried that briefcase for over 20 years until the people in my office caused it to mysteriously disappear.

One interesting observation I made at the DA meetings was that one of the main topics of conversation among elected District Attorneys was: “What is the number of your DA license plate?” Apparently, as various District Attorneys were elected to judgeship, died or were not re-elected, the other District Attorney’s plate numbers were decreased. Some professed shock to learn that I had never bothered to get a DA plate.

My attendance at future meetings was curtailed when, in the middle of my three-year term as District Attorney, a Wyoming County man shot his wife and brother to death. The first 1st Degree Murder prosecution in our county in about 40 years resulted. The jury found the defendant guilty. This resulted in an automatic death sentence. I prepared the Appellate Briefs and at the request of the new District Attorney, argued the case before the Court of Appeals in January, 1953. The lower court’s verdict was affirmed.

My husband, Ned Smallwood, died in February, 1952 leaving me with two children to support. The DA’s part-time salary of $3,000 for what turned out to be practically a full-time job was not feasible in my situation. I did not run for re-election.

I am now completing my 50th year of trial practice in Wyoming County and treasure every minute of it.

Running for District Attorney of our County started out with a reading of the Election Law. It sounded simple enough: You simply got petitions signed by enough registered voters, filed them and you were on the ballot.

It turned out not to be simple at all. The Republican Party Machine which had controlled every County appointment and political job for over 40 years quaked at my temerity. No way would a primary election be tolerated. Since no Democrat had been elected to County Office in Wyoming County in the memory of man, this edict was equivalent to the denial of the right to run for office. I picked up the gauntlet.

It was an introduction to dirty tricks politics. Each underhanded power play by those in power heated up our campaign. I went from door to door, barn to barn, picnic to picnic. When I was nominated, everyone was shocked, including me.

With me running as a Republican, the Democrats saw their golden opportunity. The Party rift and the fact that I was a 26 year old female created a unique opportunity for the election of a Democrat. We were off on another campaign. The Democrats circulated rumors and even announced in the press that my purpose in running was to close bars and liquor stores and “dry up” the County. My husband, Ned, and I talked it over. He sent me out to the County bars during the quiet hours. I would sit at the bar and talk to the bartender while sipping a brew. I was not a drinking woman so covering many bars a day with a few sips at each was perilous, but it achieved its purpose. The bartenders squelched all talk of my tea-totaling ambitions. Meanwhile, I spoke to church groups, women’s clubs, men’s clubs and veteran’s clubs. My message was always the same — the District Attorney’s job was to enforce the law and to not make it. I would enforce the laws as I found them.

On election night pandemonium broke out. During the excitement, it suddenly occurred to me that the battle was over and that now I must actually be the District Attorney.

For a while it was chaos. Newspapers from around the world phoned me. Reporters and photographers flocked in. It was a little overwhelming and disturbing. I had run as a lawyer and a person, not as a woman. Now my only recourse was to do the best possible job in my new office.

Just before midnight on New Year’s Eve, 1949 I took the oath of office before a very tipsy County Clerk on his front porch. I had learned that evening that if an elected official wasn’t sworn in before January 1st, it would create a vacancy which the Democratic Governor could fill by appointment.

The District Attorney’s job was a part-time job and there being no assistants I had to prosecute all crimes in both County Court and Justice Courts. There followed three years of challenge and adventure including cases of attempted murder, murder, DWIs, manslaughter, trials of pinball machines, burglary, larceny, rape, sodomy, and assault.

To add to the challenges, my daughter Suki, was bom on February 11, 1951 on the day before I was scheduled to commence a manslaughter trial. The trial was simply adjourned. The baby refused adjournment.

In late 1951 a man shot to death his wife and brother-in-law. This meant a full-time investigation. Then in February, 1952 my husband died suddenly leaving me with a seven year old son and a one year old daughter. The District Attorney’s salary at the time was $3,000 a year. Our private practice had begun to take root. It was a trying time. However I had no choice but to continue preparing for and trying the first-degree murder charges.

As I walked towards the courtroom, I heard a County Officer remark “Now we’ll see what kind of a District Attorney we have!” That remark sustained me through around-the-clock work and sleepless nights.

I did not run for re-election.

After my three-years, I concentrated on my private practice. I have been greatly blessed by having brilliant associates and clients who have given me their trust.

This is a remarkable account by a person of uncommon accomplishment, good nature, and humility. Being a woman District Attorney in 1949 was no ordinary feat. It was the very year in which Harvard Law School Dean Erwin Griswold announced that the Law School would open its doors to women the following year.115 Many of the country’s most prestigious law firms had no women at all, let alone as partners.

To put it all in further historical context, the United States Supreme Court in 1873 ruled against Myra Bradwell when it rejected her argument that the privileges and immunities clause of the Constitution guaranteed her the right to practice law.116 New York’s first women lawyer, Kate Stoneman, was admitted in 1886, Delaware’s first women lawyer was admitted in 1923, and Alaska’s in 1950.117 Birdie Amsterdam was the first woman to be elected as a New York State Supreme Court Justice in 1958.118 Judith S. Kaye was confirmed as New York’s irst woman Judge of the New York Court of Appeals on September 12,1983, and was sworn in as the first woman Chief Judge on March 23,1993. Charlotte Smallwood takes her place among these pioneers.