James Kent was born in 1763 in the village of Doanesburg, New York, the son of Moss Kent, a lawyer and first Surrogate of Rensselaer County, New York. He was educated at the Latin School in Danbury, Connecticut, and entered Yale College in September 1777. His studies were repeatedly disrupted by the Revolutionary War and his childhood home was burned by the British in 1779. Upon graduating from Yale in 1781, Kent spent three years studying law in the office of New York’s first Attorney-General, Egbert Benson. He was admitted to the bar in 1785 and formed a partnership in Poughkeepsie, New York with Gilbert Livingston. James Kent was elected to the New York Assembly in 1791, served for two consecutive terms and was again elected to a further term in 1796.

In 1821, Chief Justice Kent was a member of the New York State Constitutional Convention where he unsuccessfully opposed the raising of the property qualification for African American voters. Under the 1821 Constitution, he was required to retire as Chancellor upon reaching the mandatory retirement age of 60 years, which occurred in 1823.

James Kent resumed teaching at Columbia College in 1824. His lectures now incorporated the extensive research that he had undertaken for his judicial opinions. These lectures were to become the basis for his landmark treatise on the American common law, Commentaries on American Law. At the time of his death, on December 12, 1847, he had just completed the sixth edition of this work.

In The Founder’s Constitution, an anthology of writings (letters, records of debates and early cases) relating to the Federal Constitution, Chancellor Kent’s Commentaries are included as follows: 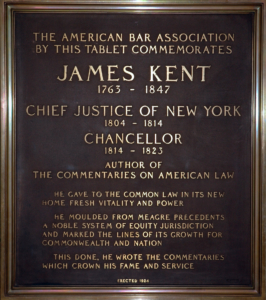